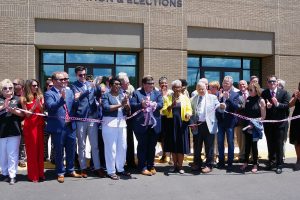 County Council members and other local leaders cut the ribbon on the new offices for Veterans Affairs and Voter Registration and Elections.

A nearly year-long project that gave new life to a former grocery building and new homes to vital Laurens County agencies officially opened Thursday with a ribbon-cutting ceremony featuring a crowd of area veterans along with local and state dignitaries.

The former Winn-Dixie building off of Hillcrest Drive now houses the offices of Voter Registration and Elections and Veterans Affairs, providing more space and a modern facility to serve voters and veterans. Both offices were previously located on the ground floor of the Historic Laurens County Courthouse on the Public Square in Laurens.

“We built this building for the people of Laurens County,” said County Council Chairman Brown Patterson. “This building outside of our main office building will be the most used county building that we have. Out of respect for our veterans that have needs, this building is a much more easily accessible building for y’all. . . . And one of the most important things we can do as people is vote. It’s how people like myself get where we are, and we appreciate your input and putting us in office. If it wasn’t for you, we wouldn’t be here either. This building is for you and is something that can be admired.”

The county purchased the building for $760,000 and spent about $5.7 million to renovate it, including asbestos abatement and other necessary work. The renovations are ongoing and after completed will house county emergency services staff.

“We’re just thankful to have this opportunity,” Patterson said. “We look forward to finishing out the rest of it for our emergency services staff. They also do a great job behind the scenes serving our community day-in, day-out, 24/7.”

The finished product thus far has impressed workers and board members in both agencies who now call the new building home.

The Voter Registration and Elections offices got a test run for the November General Election during June’s Primary Elections.

“It’s fantastic. It’s amazing to have as much room as we need to actually prepare the equipment,” said Lynne West, executive director of county Voter Registration and Elections.

Even the design of the new offices plays a role in the way the local voter registration and elections agency is perceived, West said.

“We like all the glass,” she said. “It further promotes transparency, and in our world that’s a big thing right now. We wanted it to feel transparent, and that’s important.”

West said as many as elections officials from as many as nine other counties, including Colleton and Abbeville, came to the ribbon cutting to congratulate her and her staff and take away ideas for their own offices.

With added space, the Veterans Affairs office staff, which was hamstrung by cramped quarters in its former home, can offer upgraded and expanded services to local veterans.

The new office includes computer work stations. Office windows are adorned with stirring photographs that create a patriotic mural as a reminder of the sacrifices made by armed services veterans. 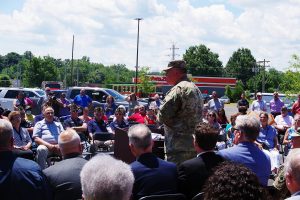 South Carolina National Guard Maj. Gen. Van McCarty said the new building fulfills the promise the country has made to its citizens and its veterans.

“You deserve all the things this government, this country has promised to you,” McCarty said. “This building will be access to those benefits – access to the voter registration process and the voting process that allows us to separate ourself from many other countries around the world.

Then, McCarty especially showed appreciation for the large group of veterans and first responders in attendance.

“Thank you to our veterans,” McCarty said. “Our freedom, our privilege to vote, our ability to go to church, our ability to stand and speak – whether you’re speaking in protest or for something others don’t agree with – is in many cases anchored by … our (U.S.) Constitution, which our service members have sworn to serve and protect against all enemies, foreign and domestic.”