Laurens, South Carolina –  If you can’t take a joke and honestly don’t like being teased a bit, then don’t even bother 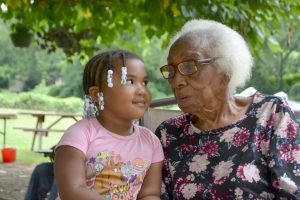 Inez Booker, who turned 105 in July, chats with 3-year-old Quin Hill, one of her 31 great-grandchildren.

dropping by to visit Inez Redd Boozer.
At 105 years old, the Laurens woman likes to take it and dish it back, but only when everyone she’s chatting with also likes to tease, joke and laugh.
In her own way, she lives out the proverb from Proverbs 17:22, “A joyful heart is good medicine.”
When the weather is good, Boozer enjoys sitting out under the thick canopy of a mulberry tree in the Jersey neighborhood where she has lived almost all of her years. It’s the same tree that provided shade for her and about 50 family members who came from across the Upstate and other states to celebrate her birthday with a dinner on July 16. 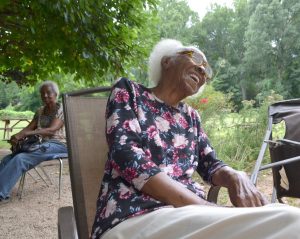 “There were pots of food cooking everywhere, and I just sat here and let them do it all,” Boozer said. “They were trying to make me a big shot.”
It doesn’t take a specific event, however, as almost every day a slew of grandchildren, great-grandchildren and beyond often drop by for a visit.
I was born July 14, 1917,” Boozer said. “I was born right over there,” pointing in the general direction slightly over from her current home near Sanders Middle School.
Her parents were Caroline and Lewis Redd.
At the time she was born, Woodrow Wilson was president and the U.S. had recently entered World War I. Laurens, South Carolina, was deeply segregated and young African-American women had little recourse but to clean and cook in the homes of much wealthier whites.
“When I was 15, I went to work for the white folks,” Boozer said, explaining that several times a week a car would pull up to her school and take her to one of the homes where she worked either cleaning, ironing, cooking or caring for children. Her father and brothers worked for the railroad.
“I worked hard my whole life,” Boozer said, 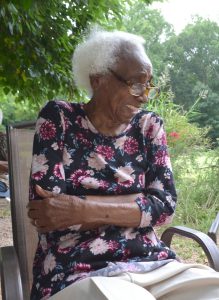 adding that when she married and had children of her own, her mother watched over her daughters so she could continue working.
As she grew older, she stayed busy in the community as well.
“She was a good cook and she cooked suppers for all the football players at Sanders High School before every football game,” said her daughter, Nellie Bolden, who lives with her mom.
“Yes, I always worked hard but I liked to have fun too,” Boozer said. “My mama taught me to be nice to everybody. There’s no need to be hateful when you can have fun.”
She admits, however, that her version of being nice is sometimes misinterpreted by folks who are “stuck up.”
“If they come around and they’re stuck up, I won’t even look at them,” Boozer said, folding her arm for emphasis and looking away. “I like people who can laugh at a joke.” 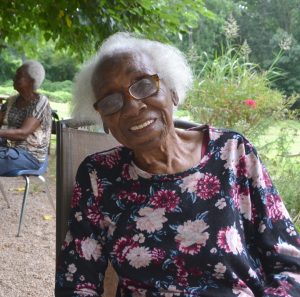 She tests her material out on the staff at her doctors office, which, admittedly at her age, is where many of her social outings take place.
“I get there and they say, ‘Look who’s here!’ and I walk in like I don’t see them and then say, ‘you don’t really love me because you’re always sticking me and such,’” Boozer said. “I tell them I’m not coming back either, but they don’t believe me. They just laugh.”
To have lived so many years means she’s had her share of losses. She has outlived two of her daughters, but gratefully still has Bolden, plus another adopted daughter who lives out of town. In the 1990s her husband, Charlie Boozer Jr., passed away and she said that was hard.
“I never knew another man like him,” Boozer said. “When he died, I thought I’d die right behind him.”
Instead, she’s continued being a fun and teasing mentor to dozens of descendants, most of whom call her “Nananan” rather than the simpler “Nana.”
Bolden said the latest tally includes Boozer’s four daughters, 13 grandchildren, 31 great-grandchildren, 49 great-great-grandchildren and three great-great-great-grandchildren.
Since Boozer has taken care of plenty of other people she doesn’t mind some of these younger ones doing a little for her, and she passes on a hug, a smile or laugh, some of her own proverbs and maybe some needed scolding.
“I taught my children to have fun with people and laugh and show appreciation because if you don’t have fun and laugh, you’ll have trouble,” Boozer said, noting that she has also known how to stand her ground.
“I say if there’s a person you don’t like, just stand there and talk to them awhile,” she said with a telling nod. “But sometimes you do have to straighten them out.”

This story originally ran on Page 1 of the Wednesday, July 27 issue of The Laurens County Advertiser.