Clinton, S.C. – After more than three years of discussion 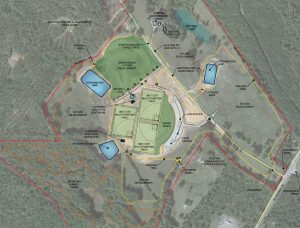 and starts and stops in clearing and grading, Clinton City Council gave City Manager Tom Brooks the approval to send contractors back to work on the long-planned Clinton Recreation Center.
In the last four years, council has been presented with several different plans, all deemed too costly. This newest drawing by W.K. Dickson was discussed during Monday night’s July workshop and Brooks said it can be completed within budget limits set by prior bond agreements under a former city manager.
The prior bond agreement is for $4.5 million, Brooks said.
Located off Highway 56 North, the complex will be on 170 acres of land which was approved for purchase in November 2018 and annexed into the city. Under then-city manager Bill Ed Cannon clearing and grading work was started but later stopped when council deemed the large rec complex plans too cost prohibitive.
This new plan is drastically smaller and less complex than council originally hoped, said Brooks, but this design by W.K. Dickson is affordable and the city can begin right away.
“Time is money and the longer we wait, the more it will cost,” Brooks said. “Right now it’s affordable.”
The plan which council approved includes three large multipurpose fields rather than the cluster of baseball diamonds on earlier plans.
At a public forum early this year, residents had voted on the aspects of the plans which they considered most important, and multipurpose fields, walking and biking trails, a splash pad for children and restroom and picnic shelters topped the lists, Brooks said. All these are included.
A large area will be included as a useable greenspace until the city gains the resources for further development, Brooks said.
Following tours of the county trails with Laurens County Parks and Rec Director Andy Howard, Brooks had become convinced that some of the trails and other work can be done in house, he said, thus saving the city more money.
Marked corners of the multipurpose fields can be used as baseball fields, Brooks said, and he hopes to collaborate with the Clinton YMCA in the process.

This story was initially posted on page 4 in the Wednesday, July 27, 2022 issue of The Laurens County Advertiser.