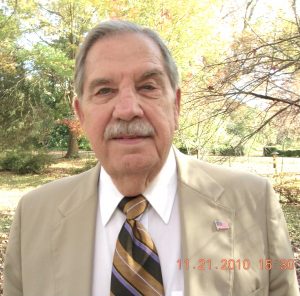 Gerald Thomas Wentworth (Jerry) gained his wings at 5:50 pm EST, July 30, 2022 (92 yrs.). He had been ill since February 2022. Gerald was born on December 19, 1929. He was a fraternal twin to Eugene Joseph Wentworth, his brother. They were born at Mercy Hospital in Independence, Kansas. His parents were Otto Claude Wentworth & Myrtle Ann (Selvey) Wentworth, who was formerly married to Edwin Silger, who had passed away. He had two half-brothers and 1 half-sister, James Edwin Silger, Robert Wayne Silger, and Wilda (Silger) Nilsson.

He grew up and lived at 409 S. 10th Street in Independence, KS until around 1940, when the family moved to a bigger home with 5 acres of land located on West Laurel Road, Independence, KS. Gerald attended Willard grade school, then Lincoln School before going to Independence High School. He graduated from High School in 1947 and had also earned the achievement of Eagle Scout in his scout troop, and then he went to Independence Junior College @ Ness Hall in Independence, KS graduating there in 1950 with an Associate of Arts Degree. While in school he worked at the Reporter Daily Paper and had a paper route. He also worked at the Movie Theatres, Booth – Beldorf at Main Street as a movie-projectionist during the last part of World War II.

The Korean War came on, so Gerald (aka Jerry) enlisted in the United States Air Force. He did his basic training in Wichita Falls, TX. Jerry was based at Edwards Air Force Base in the Flight Test Center, after serving 5 months as a radar technician at Biloxi, MS (Kessler AFB). His last duty was with the 38th Air-Sea Rescue at Misawa AFB, Japan. Gerald was discharged in 1954.

Gerald met and married Alona Mae Carr in 1953 in Coffeyville, KS, she was the daughter of Viola Versa (Ross) (Carr) Blaney and stepfather Leon Blaney of Independence, KS, and Father Oliver Fern Carr, and stepmother Evelyn Carr of Coffeyville, KS. They made their home in Eldorado, KS and later moved to Wichita, KS. They were married 15 years and had three children, Janet Gayle (Wentworth) Reinhardt, Shawn Thomas Wentworth, and Curtis Aaron Wentworth.

Gerald met and married Patsy Lee Mueller in 1973 and they were happily married 49 years. They lived at 523 Carlyle, in Wichita KS. Jerry worked for Kansas, Gas & Electric (KG&E) Utility Company for 35 years retiring in late 1989. He was a senior control technician. While in Wichita they had bought an RV for exploring and a 24-foot sailboat in 1975 or so and belonged to the Ninnescah Yacht Club at Cheney Reservoir in Wichita, KS. They loved to Sail, and Pat competed racing a smaller sailboat, and they enjoyed life.

Patsy and Jerry moved in 1995 to 715 Georgia Road, Gray Court, SC on some family land. They had almost 10 acres with 2 homes and buildings, a bird habitat, a koi pond, etc. to maintain and that kept them very busy for many years. They have had many dear and wonderful friends along this journey and are so appreciative of those relationships. Earlier this year some health issues arose, and they moved into assisted living center in Clinton, SC, a very nice place they could take their beloved dog Cindy with them.

He was predeceased by his son Shawn Thomas Wentworth, his fraternal twin Brother Eugene Joseph (Gene) Wentworth and wife Phyllis, parents Otto & Ann Wentworth, and siblings Ed & wife Curle Silger, Bob & and wife Leona Silger, Wilda & husband Wilfred Nilsson, nephews George Nilsson, and Jim Silger, niece Carol Silger and other members of his family who have passed are greeting him, and that the angels are singing and rejoicing at the gates of Heaven & welcoming him. He was the last of his generation and leaves a wonderful legacy for us. He is survived by His Wife Patsy Wentworth (Patsy’s family), His Son Curtis Wentworth & wife Kim of Olathe, KS (grands: Amanda, Blake, Brooke), His Daughter Janet (Wentworth) Reinhardt & husband Monte of Midland, TX (grands: Chris Foster & wife Jodi (greats: Cooper & Olivia), Jennafer (Foster) Ausley & husband Cheyne (greats: Sophia & Ava Iglesias, and Grant Ausley), Candace Foster (greats: Brooklyn Foster & Baylee Hammons), Sarah (Reinhardt) Puckett & husband Chase (greats: Kambri, Kameron, & Kollyns), His many nieces, nephews, and other Wentworth/Silger family members. Oh, and his golden retriever, Cindy! His love was his family and his many friends & his beloved pets. He was many things during his lifetime to many and always ready for a gathering to celebrate!

If you would like to honor our father and his memory, please donate to the Charity we Honor for his twin brother who passed from ALS, at ALS.org (for Gene Wentworth on behalf of Gerald Wentworth) or go to Mid-America Chapter | The ALS Association, or to your local Hospice Care, or your local Church, or your favorite Dog Rescue, Dad loved his dogs. The family will have a private memorial to honor Gerald later. Peace be with you and God Bless.