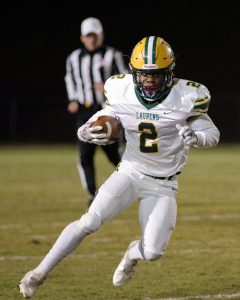 Back in November, Laurens District High running back Tye Roberson sent out a Tweet with the image of a sheet of notebook paper that read:

“Until it’s my turn, I will keep clapping for others. It’s that simple.”

It was a long wait, but Roberson’s turn finally came last week when the recent LDHS graduate committed to play for Lenoir-Rhyne.

“It was very tough because I was already looking into other schools,” Roberson said of the late offer from the Division II South Atlantic Conference member Bears.

“Then Lenoir-Rhyne added one more school to look into.”

As a senior, Roberson ran for a team-high 748 yards, averaging 6.9 yards per carry, and four touchdowns as a part of a 1-2 punch in the Raiders backfield with fellow senior Zy Todd, who signed earlier with Limestone. Roberson added 14 catches for 150 yards as he and Todd combined for over 1,500 yards from scrimmage in 2021.

In the opening round of the playoffs, Roberson had a season-high 122 yards rushing with a touchdown on just seven carries. Against Greer in the regular season, he had 103 yards on 14 attempts and a touchdown. This past spring, Roberson was a part of the Raiders’ 4X100 Upper State champion relay team in track.

LDHS head coach Daryl Smith said he was surprised the 5-foot-10, 170-pound Roberson found himself still looking for a football home in July and when Bears head coach Mike Jacobs had an opening for a skill-position player, Roberson made perfect sense.

“(College coaches) look at so many people, it’s hard to say exactly what they’re looking for, but when they sat down and looked at Tye, he jumped off the screen when they evaluated his film. They were shocked that a player of his caliber was still available.”

Roberson said the Lenoir-Rhyne offense will take advantage of his skill set as a runner and receiver out of the backfield.

“They fit my play style,” he said.

At Lenoir-Rhyne, which is located in Hickory, North Carolina, Roberson can stay closer to home. He said he plans to major in business.

Sports Notes
Summer football workouts begin Friday for Clinton and Laurens. . . . Clinton linemen made an impression at last week’s Erskine College football camp. Three of the Red Devils left with offers from the Flying Fleet, including Naiim Mayes (6-3, 200), Dre Aiken (6-3, 275) and V’ah-Jay Martin (6-1, 267). . . . LDHS wide receiver Cayson Elledge picked up an offer from Division II Anderson University, which is set to begin competition in football for the first time in 2024 under head coach Bobby Lamb, who coached at Furman and Mercer. . . . Laurens has scheduled its “Meet the Raiders” event for 6 p.m. Saturday, Aug. 13 at K.C. Hanna Stadium, featuring all LDHS fall sports teams.