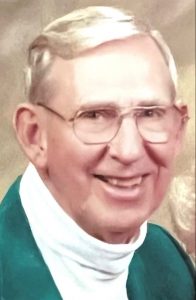 Born July 2, 1930, in Laurens, he was the son of the late George Franklin Russell, Sr. and Gladys Townsend Russell. He was a 1948 graduate of Laurens High School where he was named All State in three sports; football, basketball, and baseball. He earned an athletic scholarship to Furman University where he played football and graduated in 1953. He went on to earn a Master’s degree from Peabody Teacher’s College in Nashville, later absorbed by Vanderbilt University.

He was a proud U.S. Marine from 1953-1955 active duty, and a reservist until 1960 when he was honorably discharged. He taught at Greenwood High School and coached with the legendary S.W. “Pinky” Babb from 1955-1965, winning four state championships. In 1967, he was named Director of Greenwood County Vocational Facility and remained Director until his retirement in 2005, when the facility was renamed G. Frank Russell Career Center in his honor.

He as a member of South Main Baptist Church and Dr. Richard Carter Sunday School Class.

Surviving are his sons, James Keith Russell and Ronald Frank Russell, both living in the Atlanta area.

Funeral services will be conducted at 2 PM Thursday from the Blyth Funeral Home Chapel with Dr. Toby Frost officiating.

Pallbearers will be his sons and nephews.

The family will receive friends at the funeral home Thursday evening from 6-7:30.