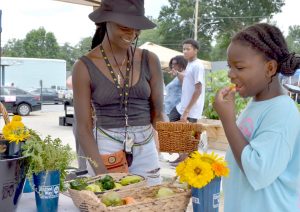 Clinton, S.C. – The people of the Lydia community in Clinton were treated to a cookout, cotton candy, natural fruit ice and a water slide Saturday as the United Way of Laurens County held a garden celebration.
Visitors were offered flower bouquets and given samples of peppers and cherry tomatoes grown in the large raised garden beds, which now fill in a portion of what had been a broken concrete pad left years ago when the old Lydia Mill store was removed.
The garden beds, soil and plantings and now the garden party were the result of grants, some significant personal donations and volunteer partnerships from across the county.
“I feel that a lot of the people that are at this event are actually from this direct neighborhood because a lot of them walked over here,” said Alesia 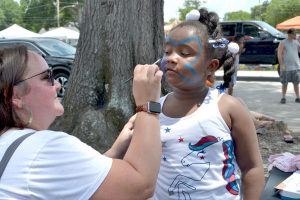 Carter, executive director of the United Way of Laurens County. “Everyone that has been coming by, even before today, has been extending extensive gratitude that something is finally going up on over here and they seem to really be enjoying it.”
Children were racing up and down the inflatable water slide and getting tickets for free lunches and treats, such as the organic cotton candy and the “J and J” frozen fruit puree. Other agencies represented included SC Empowerment Center, which gave out grab and go food bags, the Clemson Extension Service Snap-Ed nutritional education program and Gateway Counseling’s Addiction Prevention Program.
“This event was actually just to get the community out so we can give them more information as to what we’re doing currently, and what our plans are in the future because this is just the 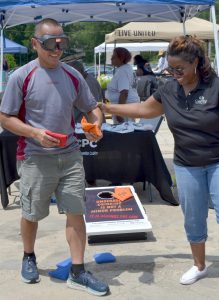 beginning,” Carter said.
Currently, there are four part-time garden staff who rotate between the three large raised gardens in Clinton, Gray Court and Waterloo. Carter said she plans additional garden events in the other communities as well, but Lydia’s space is so large and she’s hoping to attract some volunteers from among the large residential community which lives within walking distance of the Sweetheart Garden, named for its large heart-shaped flower bed.
“We’re going to be doing a whole lot of stuff over here and we’re excited about promoting healthier eating and getting people outside,” Carter said.

This story appeared on page 2 in the Wednesday, July 20, 2022 print edition of The Laurens County Advertiser.