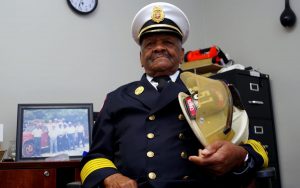 Price, the volunteer department’s first and only chief until this past Friday, stands on the left side of the frame, smiling with a small group of other volunteers who started the department on Highway 72 outside of Clinton from scratch with a used fire truck and a desire to fend for their neighbors.

Forty-seven years later, Price is finally stepping away as chief, retiring from his post as chief at the age of 88. Price was recognized for his years of service during a drop-in at the Renno Fire Department Station No. 1  that included his wife, Mamie, six children, more than 20 grandchildren and a slew of great-grandchildren.

“We’ve had some good days and some bad, but there have been more good days than bad ones,” Price said, sitting at his desk in his full dress uniform. “It’s been enjoyable. Sometimes we failed and sometimes we didn’t, but we kept on trying.” 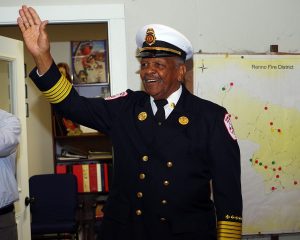 He had told Mrs. Price that he would retire years ago, but never got around to really doing it, she said.

This time, it’s going to stick.

Price recounted some of those early days and how the Renno department has grown from one station to three and has served its rural community and bustling I-26 a few miles away for nearly five decades.

The first call didn’t come in via the 9-1-1 system the county now has in place. Then, there was no 9-1-1 system, but rather ordinary phone lines and numbers to report emergencies.

And in the case of the first fire responded to a resident drove up to the department where volunteers, including Price, were working and told them about a brush fire down the road.

One problem: They were without a water truck.

“We went out there anyway and beat the fire out with pine brush,” Price laughed. “We put it out though.”

Laurens County Fire Services Director Greg Lindley said he is amazed by Price’s longevity and commitment to the department as a volunteer chief.

“Henry Price has been the anchor for this place,” Lindley said. “This fire department wouldn’t still be here if it wasn’t for him.”

Price received official recognitions for his service from the county and from Rep. Stewart Jones, who presented Price with a resolution from the Statehouse and a state flag flown over it.

Boyd Taylor is set to take over as chief, but Price said he isn’t going too far and will still be stopping in at the fire station from time to time.

“Mr. Price can relax now,” Lindley said. “He doesn’t have to worry about answering that call.”