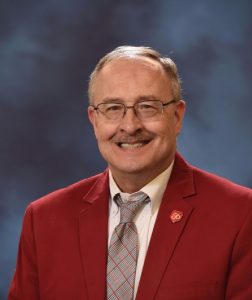 District 56 Superintendent David O’Shields has been selected for a education lifetime achievement award.

Columbia, S.C. – Superintendent of Laurens District 56 David O’Shields was one of four school leaders from across the state selected by the South Carolina Association of School Administrators (SCASA) as 2022 Lifetime Achievement Award winners.

O’Shields has spent 40 years in education as a teacher, assistant principal, principal, district administrator, and superintendent. For the last 38 years, Dr. O’Shields served the district in which he was raised and graduated high school, Laurens School District 56. While serving as assistant principal, principal, and director of student accountability, he earned a master’s degree in Curriculum and Instruction and a PhD in Educational Leadership. He went on to be named the first director of human resources for the district and subsequently interim superintendent and superintendent.

He has been an active member of SCASA for many years, serving in various groups, including the Personnel and Superintendents’ Affiliates where he currently serves as president-elect. He was recently appointed as the 8th circuit representative on the State Board of Education.

O’Shields and the other winning leaders have dedicated their lives to educating South Carolina’s children, serving their communities, and providing an example for those who aspire to leading for their contributions to education in South Carolina.