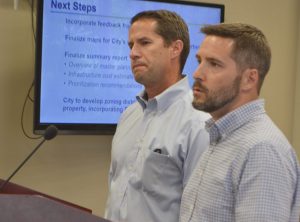 Clinton, S.C. – The undeveloped and heavily wooded areas which the City of Clinton acquired from Whitten Center could eventually include areas set aside for industrial uses, large parcel residential areas and a small commercial area if council adopts and begins working toward WK Dickson’s tentative master plan.
Clinton City Council and residents of the city were present during Monday evening’s council meeting to hear the options presented by Dickson staff members Bryan Thomas and Clay Cannon.
The agricultural reserve includes a large swath of land located behind Whitten Center. The campus itself will remain intact and not under Clinton’s ownership.
“We understand the value of the property to you and the citizens,” Thomas said. “Obviously, anything can change and what we are showing are just options that we feel could be the most beneficial.” 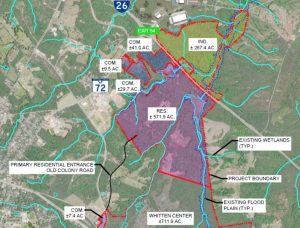 Thomas said they understood the city preferred for much of the old hardwoods to remain intact, but that it would still like to have some of the land developed in a way which conserves the beauty of the property and yet adds value and economic impact for the city.
The engineers divided the property into three major parcels, one of which includes about 570 acres for potential residential development.
Across Interstate 26 are about 260 acres which would be near the city’s industrial corridor. About 80 acres are on and near Highway 72, which will make sense as commercial property where such development is already locating, Thomas said.
“We took topography into account because we are trying to preserve as many trees as we can,” Cannon said. “The city wants a forestry management plan, with streams and with a buffer of vegetation to preserve the stream banks.
“You have a really unique situation here,” Cannon said. “This is a great recreational opportunity.”
One of the residential areas allowed for lots of about an acre, and another nearby development could include lot sizes of four to five acres for an equestrian neighborhood.
About seven miles of walking, mountain bike or horseback trails could then connect those developments and be available for public access.
Thomas said the Upstate is lacking areas that can be developed and still provide plenty of space for outdoor recreation.
If council adopts the master plan, the quickest first step is to market the commercial development lots, Thomas said.
In other business, council approved second reading on an ordinance that amends the rental codes for roll-off containers.
Council also approved a resolution that places an abandoned textile mill at 801 East Main Street under the state’s Textile Communities Revitalization Act. The property may eventually be used as a restaurant or food court.
Council also released a portion of the DE Tribble properties from the buy-back option it had been under because the owner hopes to sell the property to another developer.

On Monday night, June 13, council was holding a called meeting for a public hearing on the 2022/23 city budget.

This story originally published in the Wednesday, June 8 issue of The Laurens County Advertiser.