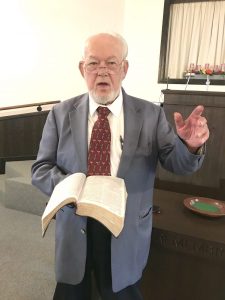 He was born April 6, 1945 in Pelzer, South Carolina and was a son of the late Junius and Minnie Iola McCoy Tripp.

Mr. Tripp grew up in poverty, and, though he could seem gruff at times, he had a compassion for the needy. If you needed help with a car and you were poor, he would be the man you would want to see. He also looked at things a little differently from most people. When his shop burned down and he had no insurance, he said in a sermon “It’s just stuff.” He preached in North and South Carolina for 53 years. When he preached in North Carolina, he had a salvage auto business there and the people who came to him, lovingly referred to him as the junk-yard preacher. We think he would smile with that on his tombstone.

Funeral services will be held Saturday, June 11, 2022 at 2 PM at the Gray Funeral Home chapel of Laurens with burial following at Forest Lawn Cemetery. The family will greet friends from 1 to 2 PM at the funeral home prior to the service.

The family wishes to acknowledge the great blessing Jimmy Tucker was in Roger’s last months of life.

Condolences may be expressed to the family online at www.grayfuneralhome.com