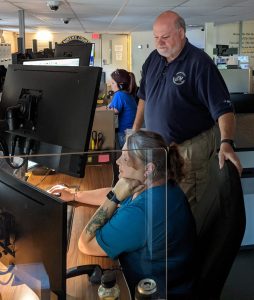 Laurens County Emergency Services Director pecks at his iPhone and the words appear on a screen in front of a 9-1-1 operator.

“Do you have an emergency?” operator Jodi Shea types.

“I’m lost,” Avery responds via text, and he receives a link he can click that should lead responders right to his location.

“That’s what we can do now,” Avery said. “The technology we have now is amazing.”

That wasn’t always the case for Laurens County when Avery arrived to take over emergency operations and build a 9-1-1 system out of scratch. Before his arrival in 1991, emergency calls went to individual agencies, slowing response times, robbing them of valuable minutes that were sometimes the difference between life and death.

Now, after just over 30 years at the helm and as he looks over a department he helped transform and take into the 21st century, Avery is retiring. His last day on the job was Tuesday.

“It was time for a change,” Avery said, thinking back to 1991. “I was fortunate enough to be in the right place and be selected to implement those changes. Those are historical markers in time for Laurens County because we came from a seven-digit number or an 800 number for emergency services to a three-digit number, and we have the same technology and same capabilities that all the surrounding counties have.” 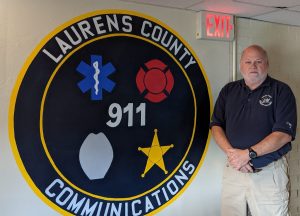 The new system also changed addresses and the way folks in the county get around, naming sometimes unnamed roads and replacing old rural route numbers with modern addresses that emergency services and GPS systems now use.

He said Avery changed all that.

But Avery said he didn’t want the credit alone for implementing the system or for bringing it into the digital age over the past few years with new “state-of-the-art” servers, computers and communications equipment. He called the 9-1-1 operators, who handle an average of about 150 emergency calls per 12-hour shift, “the unsung heroes” of his department.

“It’s taken everyone – the police chiefs, the fire departments, the sheriff, animal control, everybody – if we’re not all on the same team, it’s not going to work,” he said.

The bottom line with all of that is that Laurens County is better prepared now than for the possibility of a nightmarish scenario.

“Yes, we are in a better situation,” Avery said, recalling a long list of storms and other events that tested the strength of the 9-1-1 system, including a winter snow storm that spurred over 3,000 calls to 9-1-1.

While storms, crime, fires and traffic accidents may be the norm from day to day or year to year, one of Avery’s largest challenges come in the end of his career as the county grappled with COVID-19.

There was no roadmap for emergency services directors or personnel to deal with a pandemic, so Avery and his department improvised and adapted to meet the needs of the county when COVID-19 struck in 2020.

“COVID was extremely stressful – there’s no doubt bout that,” he said. “But as the emergency manager, everybody was looking to me for guidance, so we put together some operations and plans.”

Early on, Avery and his staff scrambled to get safety equipment such as masks, shields, gowns, hand sanitizer and other needs that were in short supply all over the world.

“We didn’t have a lot of supplies on hand, so we were able to work with the state, and we were getting supplies from the national stockpile,” he said. “That really helped us get over the initial hump of COVID.”

Segars said the creation of the 9-1-1 system a lasting achievement from Avery’s tenure, but also noted his contributions beyond it.

“His contributions in the emergency management aspect of the job was huge,” Segars said. “We’ve been through storms, hurricanes, plane crashes, railroad derailments, and whatever it was, we always had a steady hand at the wheel. (Avery ) was always there, no matter what.”