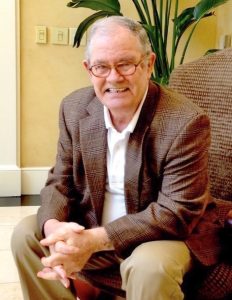 He was born July 10, 1945 in Clinton, SC and was the son of the late William Jay Douglas and Leona Osborne Douglas.

Scotty grew up a child of the Clinton Mill Hill. After a short move to Orangeburg, South Carolina in his late teens, his family returned to Laurens, South Carolina where he met the love of his life, Brenda. They found a love that sustained and endured for 55 years.

Scotty made raising his children and leading his family his life’s work. He enjoyed all things outdoors and was a master of hunting the whitetail deer.

Never defeated by the paralysis from a traumatic brain injury, he loved farming the land and planting trees on his property in Hickory Tavern, South Carolina. Scotty was a builder of strong character in the family members and friends that he loved.

In addition to his parents he is preceded by his sister, Norma Jean Smullen.

A Memorial Service will be held Sunday, June 5, 2022 at 3 PM at the Holly Grove Baptist Church. The family will receive friends immediately following the service in the Fellowship Hall.

Condolences may be expressed to the family at www.grayfuneralhome.com and in lieu of flowers memorials may be made to Hickory Tavern Fire Department.

Gray Funeral Home of Laurens is assisting the family with services.