Laurens, South Carolina – Laurens District 55 School Board on Monday night approved a change to a Modified School Year Calendar starting with the 2023/24 school year, meaning children will get eight weeks of summer vacation instead of ten weeks under the traditional schedule.

In a presentation by

Assistant Supt. for Pupil Services Jody Penland, the board heard about survey results which showed a majority of teachers and parents who responded preferred a modified calendar over traditional or year round.

After extensive discussion the board voted unanimously to adopt a modified calendar for the 2023/2024 school year.

Penland said that District 55 has typically worked with District 56 to coordinate the districts’ calendars, but administrators for District 55 began looking more seriously at the benefits of three optional calendars, discussing traditional versus modified versus the year-round calendars. The process included the District 55/56 joint calendar committee meeting, reviews with schools and teachers, another District 55 joint calendar committee meeting, community feedback through a virtual meeting and a Listen and Learn session, and finally Monday night’s presentation to the board.

”There were 783 survey responses, about 400 parents and about 150 teachers, plus community members,” Penland said.

In survey comments, some parents expressed concern about additional costs of child care during the unusual break periods, which includes two full weeks between the first and second nine weeks as a Fall Break and two full weeks at Spring Break, Penland said.

“The child care agencies, churches and the Y said as long as they knew ahead of time they could bring in extra staff for those breaks,” Penland said, adding that some churches which responded said they might be able to hold special camps during those longer breaks. 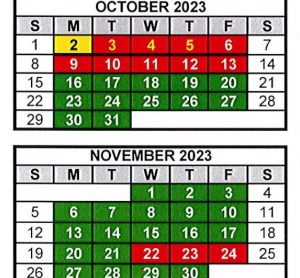 Under the modified calendar, there will still be the required 180 days of school for children, and it includes the same numbers of required professional staff development days, Penland said.

With the new schedule, students would arrive to school on August 1,  2023, and then a staff development day would be followed by Labor Day for a four-day student break at that time, according to calendars provided. Students would then have a two week Fall Break between October 2 through 15, a typical Thanksgiving holiday of three days and two weeks for the winter holiday.

Occasional days for state holidays or professional development would be followed by two-week-long Spring Break from March 25 through April 6, 2024.

If needed, inclement weather days would be the first three days of June.

Board chair Cathy Little said she’d have liked to see a much larger number of parent surveys but understood that was all the district received. Board member Neal Patterson suggested parents who were concerned about late summer vacations had the option of October vacations when the beaches were less crowded and save money with off-season costs, and board member Susan Ware said the somewhat shorter summer may mean that students would retain more knowledge that is often lost during a lengthier summer break.

As for child care issues, Penland said families would have a year and a half to begin making arrangements.