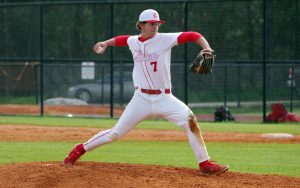 Clinton senior Davis Wilson (7) hit a three-run home run and closed out Thursday’s playoff win over Powdersville on the mound.

POWDERSVILLE – Davis Wilson and Jaylin Alexander hit back-to-back home runs to spark a six-run fourth inning Thursday as Clinton opened the Class 3A Upper State Championship round with an 18-11 victory over Powdersville.

With the win, the Red Devils will travel to Chapman for the fourth meeting between the two teams this season. Game time is set for 7 p.m. The Panthers defeated Seneca 8-2 Thursday night. Clinton split with the Panthers in their two regular-season meetings and then won a single-game playoff to secure the Region 3-3A championship and the region’s top seed heading into the district playoffs.

Against Powdersville, Wilson went 2-for-5, scored twice and drove in four runs. He moved to the mound over the final 1 2/3 innings, assuming a 15-5 lead and surviving a potent trip through the Patriots’ lineup to lock down the win.

The Red Devils (25-5) scored their 18 runs on 18 hits and survived five errors, which ultimately cost Clinton only one unearned run, in the victory. Eight of Clinton’s nine players in the batting lineup recorded hits and six of those had multiple hits in the game. Clinton also collected seven extra-base hits, including home runs from Wilson, Alexander and Zane McLendon and four doubles.

McLendon went 3-for-3 with three RBI and three runs scored, and he was hit by a pitch to reach base in each of his at-bats. Zack Fortman with 3-for-4 with two runs and two RBI, and Caleb Taylor went 2-for-4 with a double and four RBI.

The Patriots, who swept Belton-Honea Path in a Monday doubleheader to claim the District 2 championship, jumped out to a 3-0 lead in the first inning behind Collin Wendorff’s three-run homer. Wendorff, Gavin Troyer and Zach Stover all hit home runs for the Patriots. Troyer went 2-for-3 and drove in two runs.

Clinton starting pitcher Damian Price went three innings to pick up the win before giving way to Taylor and then Wilson. Powdersville starter Clay Davis was touched up for nine runs on 10 hits through 3 2/3 innings of work and took the loss.

With Thursday night’s offensive outburst, the Red Devils have scored 60 runs in their five playoff games.

Laurens’ scheduled Upper State Championship round game at A.C. Flora against the Class 4A top-ranked Falcons scheduled for Thursday was postponed due to rain in the Columbia area.

Senior Parker Clarke is expected to start on the mound for the Raiders (15-12), who won the District 3 championship as the No. 3 seed with three straight victories.