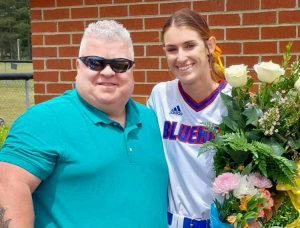 Not with a cross-country flight from California and the seemingly ever-present threat of COVID-19 anymore. And not with the leukemia he has been battling for the past four years.

His daughter, Presbyterian senior Taylor Ward understood – because the past four years have made her tougher than maybe she should have to be and maybe a little wise beyond her years.

So, she turned to the east-coast family she chose after taking an internship with the Laurens Police Department and began working with Laurens Police Master Patrolman Brent Rushing.

He brought her flowers for PC softball Senior Day as is tradition. She calls him her mentor.

“Brent has just been nothing but a mentor and a friend and a father figure to me since I got there (for the internship),” Ward said. “It was the easiest thing, calling and asking him to escort me out for Senior Day.”

After the pre-game ceremony, PC defeated USC Upstate for the only time in their three-game series, and Ward, who has played sparingly since returning from 2020 surgery on her pitching elbow, pitched a scoreless final inning for her first save of the season.

As her father watched a country away on ESPN+, Rushing watched her play for the first time, saying he couldn’t have been more proud as Ward shut down the heart of arguably the Big South Conference’s toughest lineup.

But Rushing said the day was special to him long before Ward walked into the circle four years after committing to PC and packing up her belongings for a 2,500-mile drive from SoCal to South Carolina and the small southern school she admittedly fell in love with from the very beginning.

“It is probably one of the great privileges I have had in quite a while,” Rushing said.

PC requires students taking part in a professional internship to commit 126 hours over the course of two semesters. Ward turned in more than 700 hours for the LPD, spending most of them riding along with Rushing and his K-9 partner, Blue.

“It was just one of those things where I was there at the right time,” Rushing said. “The funny thing is, I was supposed to be helping her, and I think she made me a better officer because she asked me very insightful questions. I had to think more and make sure I could answer them to help her get to where she needs to be. It kept me on my toes.”

With PC’s graduation days away, Ward has already been hired by the Charleston Police Department, but her goals are bigger. The psychology major said she wants to become a behavioral analyst, perhaps for the FBI.

“Charleston is the biggest municipal police department in the state,” she said. “There are 456 officers on staff. With such a big agency, they also have a huge influx of people that will leave and go on to higher, federal-level things, so I think that’s the best place for me to go.”

“She’s going to be good at it,” he said. “She analyzed me and nailed it – youngest child with two much older brothers and a latch-key kid. She was right about everything.”
Ward smiles when asked about working on her profiling skills.

“I promise not to do it to people I like,” she said. 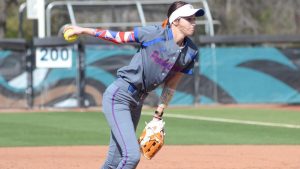 Taylor Ward in action during the 2019 season. (PC Athletics photo)

The elbow surgery was a success, but it led to a softball career interrupted at PC. The Blue Hose signed Jenna Greene and Morgan Hess, who made a solid case this season for Big South Freshman of the Year, and they have pitched most of the innings and gotten the vast majority of the wins in PC’s most successful softball season ever.
Ward spent nine months recovering as COVID-19 shut down almost everything in 2020, including PC’s campus and college sports.

“I spent the majority of time in my apartment,” she said. “It was a long recovery, and it was frustrating for sure but, I mean, it’s paid off. We’ve had an exceptional season.”

And Ward had one exceptional day on Saturday.

“It felt good to have a performance like that as my last one on my home field,” she said.
She shrugs. Maybe she proved something with the Blue Hose headed to the Big South tournament Wednesday where pitching could be at a premium if PC advances far.

Maybe there will be some trust in that surgically-repaired elbow.

“I hope so,” she said as her teammates began stretching a few feet away on Monday. “I mean, I put in the work. So, yeah, let’s see.”