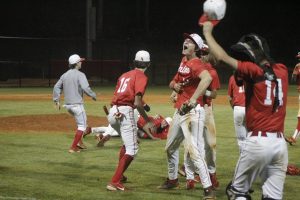 The Red Devils celebrated after midnight Tuesday after getting past Pendleton by splitting a doubleheader to advance to the Class 3A Upper State championship.

Visiting Pendleton took Clinton deep into the night Monday before the Red Devils were able to claim the Class 3A District 3 championship.

The Bulldogs snapped Clinton’s 16-game winning streak with a 12-10 come-from-behind win in Game 1, which forced a final elimination game.

In Game 2 of the doubleheader, a second Pendleton seventh-inning rally fell short and the Red Devils escaped with a 6-4 victory.

Clinton (24-5) advances to the Upper State Championship with the win and will face host Powdersville Thursday. Chapman will face Seneca in the other half of the bracket.

The Red Devils scored all six of their runs over the first four innings, jumping out to a 3-0 lead after the first and held on for the victory that put them in the Upper State Championship.

Wil Stewart, who turned in five innings as the Game 1 starter, returned to the hill in Game 2 and gave up one hit and one unearned run and striking out four  in 2 1/3 innings of relief en route to the win. Damian Price pitched the final 2 2/3 innings, giving up three unearned runs in the seventh before closing the door on the Bulldogs and picking up the save.

The two teams combined for nine errors – six for Pendleton and three for Clinton. All four of Pendleton’s runs were unearned.

Clinton lead-off hitter Zack Fortman collected two of the Red Devils’ seven hits, going 2-for-3 with a double, two runs scored and one driven in. Zane McLendon went 1-for-2 with a triple and a run scored, and Davidson Pitts went 1-for 3 and scored twice.

The Red Devils won 16 straight games heading into Monday’s contests, including an 11-8 victory over Pendleton Thursday that got Clinton unscathed to Monday’s championship.

Pendleton trailed 2-0 in the fifth, but the Bulldog bats came alive after that. Pendleton got a single run in the fifth and then 11 more over the next three innings, including a five-run eighth that gave the Bulldogs the distance they needed. The game was tied at 7-7 after the seventh inning, forcing the extra frame.

Pendleton’s Aiden Clay hit a two-out three-run triple in the eighth. Clinton added three runs in the bottom of the frame, but the rally fell short.

Davis Wilson, who sparked a four-run sixth for the Red Devils with a two-run triple, went 3-for-5 and drove in three runs. Fortman went 2-for-4 with 2 RBI.
Jaylin Alexander, who came on in relief of Stewart, took the loss for the Red Devils. 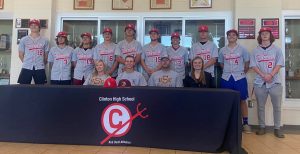 Red Devil Notes: Powdersville is selling tickets for the Upper State Championship online at powdersvillepatriotathletics.com. Tickets may be purchased with cash at the gate, but buyers must have exact change. Game time is 6 p.m. . . . Clinton senior outfielder/pitcher Trent Roth signed his National Letter of Intent Tuesday afternoon with USC Salkehatchie.