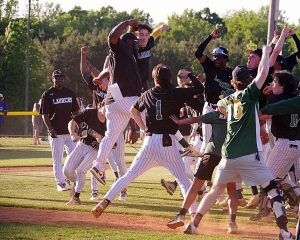 It’s just that he didn’t want to, keeping a sign in his locker this year with the “4-0” loss he took on the mound for the Raiders against Lugoff-Elgin. That loss opened the door for Lugoff-Elgin to force a winner-take-all game for the District championship, and the Demons took all as LDHS went two complete games without scoring a single run.
That sign and that bitter memory was all Edwards needed for motivation Monday as LDHS slammed the door on visiting Catawba Ridge 3-2 and winning the District 3 championship to advance to the Class 4A Upper State Championship bracket.
“I did not want this to be my last game,” said Edwards, a North Greenville signee. “I wanted to go out there and compete for my guys. . . . My team had my back the entire night. They gave me three runs, and I told them it was all I needed.” 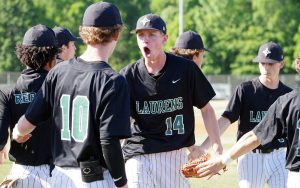 Laurens pitcher Jackson Edwards is pumped out after a scoreless inning Monday in a 3-2 win over Catawba Ridge.

The Raiders (15-12), who have now won five straight games and three straight in the postseason, jumped out to a 3-0 lead thanks to a three-run second inning spurred by DH Bennett Edwards’ RBI double that scored freshman catcher Coleman Coker, who went 2-for-3 on the day.

Zay Pulley, who went 1-for-3 at the plate, followed up Bennett Edwards’ run-scoring double with a two-run double of his own, scoring Jack Yarbrough and Bennett Edwards.

From there, the game became a pitcher’s duel between Jackson Edwards and Catawba Ridge lefty starter Jake McCoy, who settled down after early control problems that kept the Raiders on the basepaths.

Jackson Edwards scattered five hits over seven innings, walking two and striking out three. He was helped by two infield double plays started by shortstop Thomas Willis and second-baseman Hunter Nabors – the last of which ended the game – and a pair of twisting catches by Jackson Martin in right field.

Despite getting runners in scoring position early on, LDHS was unable to push runs across beyond the second inning.

LDHS head coach Tori Patterson said the Raiders learned from last year’s hard lesson, which was only the latest chapter in a frustrating history of district playoff losses.

Patterson added that he learned from last season as well, when a more experienced Raiders team had higher expectations after winning the Region 2-4A title.

“I think we were just kind of too tight last year, and we’ve been focusing on just playing loose, playing fast and playing with a lot of energy, and I think that’s keeping us from being too tight,” he said. “And myself – I was way too high-strung last year. I’ve just tried to relax and just let our guys go. I just trust in my team.”

The Raiders, who arrived in the District 3 tournament as the No. 3 seed from Region 2-4A, will begin play in the Upper State Championship at 7 p.m. Thursday at A.C. Flora.

Raider Notes: After Bennett Edwards injured his arm in the final weeks of the regular season, Coleman Coker moved up from the JV squad to take over catching duties and has been producing for the Raiders at the plate despite having his first varsity at-bat just two weeks ago. . . . The Greenville News reported Monday that former LDHS and current Hillcrest head baseball coach Dale Nelson is retiring after 28 years as a high school coach. The News said Nelson will continue to teach for one more year at Hillcrest and coach this summer but will not return for the Rams in 2022-23. Nelson, whose son is playing baseball at College of Charleston and daughter is soon to be playing college volleyball, said he is retiring to spend more time with his family. Nelson led the Rams to the program’s first state championship last year. Nelson coached at LDHS for over 20 years and resigned in 2016. His list of former players includes current Raiders head coach Tori Patterson and current minor leaguer Thomas Jones (Marlins).