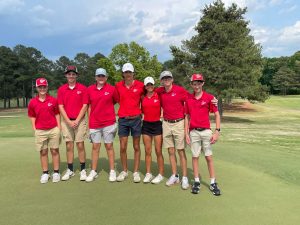 The Clinton High golf team finished second at the Region 3-3A Tournament and heads to the Class 3A Upper State tourney.

The Clinton High golf team advanced to the Class 3A Upper State Tournament with a second-place finish in the Region 3-A Tournament Monday at Three Pines Golf Club in Woodruff.

Clinton shot a 349, edging Chapman (356) by seven strokes for second place behind region champion Woodruff. The Wolverines dominated the event, shooting a 288. Emerald (386) finished fourth, Union County (387) was fifth and Broome (408) was sixth.

The Class 3A Upper State Tournament is scheduled for next Monday (May 9) at Saluda Valley Golf Club.

Laurens will host Westwood at 6:30 p.m. Friday as the Class 4A Upper State District 3 tournament continues.
Fourth-seeded Westwood (12-9) lost to top-seeded Catawba Ridge 6-0 Wednesday night, setting up a win-or-go-home game against No. 3 LDHS. The Raiders (9-8) lost 11-0 at Westside Tuesday night.
The winner of the LDHS-Westwood game will move on to face the loser of Friday’s contest between Catawba Ridge (21-4) and Westside (10-7) in another elimination game.

Laurens Academy defeated visiting Community Christian 8-3 Wednesday in the SCISA Class 1A state baseball tournament. With the win, the Crusaders extend their season for at least one more game.
The Crusaders are to host Patrick Henry Academy Friday at 6 p.m. as the tournament continues.
LA starting pitcher Lee Carroll combined with three relievers to shut down the CCA bats, giving up five hits and two earned runs. Brayden Burke and Kyle Thompson pitched the final two innings without allowing a baserunner.
Jared Willard went 2-for-4 at the plate with a two doubles and drove in four LA runs. Cal Roberson went 2-for-3 with a solo home run and three runs scored for the Crusaders; Hack Hardy also went 2-for-3, drove in a run and scored one.
Posted in Breaking News, Sports