Both teams advance to respective Class 3A (Clinton) and Class 4A (LDHS) district championship games scheduled for Monday and will await Saturday’s elimination-game winners. Monday’s schedule will include doubleheaders if necessary. 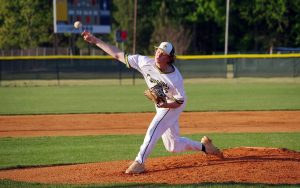 Clarke allowed only a pair of unearned runs in the third inning after he had been spotted a 3-0 lead.

The Raiders (14-12) got on the board with a two-run second inning when Jordan Roberts scored on Hunter Nabors’ RBI single. Jack Yarbrough came home from third when Zay Pulley hit into a fielder’s choice to make it 2-0. LDHS added a run in the third when Jackson Martin scored what proved to be the game-winner on Jaedon Goodwin’s groundout, giving the Raiders a 3-0 lead.

The Copperheads (21-7) quickly answered on a two-run error to cut the Raiders’ lead to 3-2 in the bottom of the third.

But that was all Clarke, a Cleveland Community College signee, allowed.

Martin added an RBI triple — the only extra-base hit of the game — that scored Thomas Willis in the seventh. Martin came home on a single from Roberts to give the Raiders a 5-2 lead.

Pulley and Martin went 2-for-4 as LDHS collected nine hits. 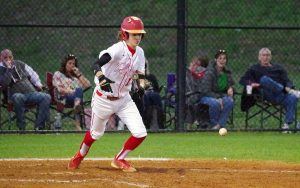 Spurred by a five-run second inning, Clinton held off the visiting Bulldogs, scoring 11 runs on 16 hits.

After Pendleton took a 1-0 lead in the first, the Red Devils were helped by two Pendleton errors and answered with two runs in the bottom of the inning.

Clinton’s five-run second followed three more runs from the Bulldogs in the top of the frame and was highlighted by Zack Fortman’s two-run double and a two-run single from Luke White that put the Red Devils ahead 7-4.

Pendleton cut the Clinton lead to 7-6 with two more runs in the third. Clinton added two runs in the fourth and two more in the fifth, extending their lead to 11-6 until the Bulldogs plated two in the sixth.

Seven Clinton players recorded multiple hits in the game. Region 3-3A Player of the Year Wilson Wages went 3-for-4, scored two runs and stole a base, and Fortman went 2-for-3 with three runs scored and two RBI. White, Davidson Pitts, Davis Wilson, R.T. Corley and Caleb Taylor had two hits apiece for the Red Devils.

Taylor, the third Clinton hurler for the game, pitched the final 3 2/3 innings, striking out four, walking five and allowing three runs while still picking up the win.

The Red Devils are set to host the district championship game Monday. A doubleheader will be played if necessary. 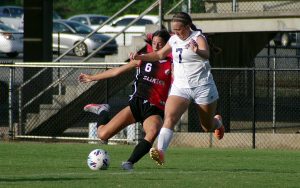 The two teams battled to a 1-1 tie at the end of regulation. The second-round playoff game remained scoreless for more than 38 minutes when West-Oak’s Rachel Jacobs snuck a ricochet that had bounced off the crossbar and then the upright into the net for a 1-0 lead.

Clinton midfielder Lauren Wargo had left the game twice due to injury but made her way back with a taped ankle late in the second half. She returned in time to tie the game on a corner kick, getting the ball past Taylor from a scrum in front of the goal just seconds before the whistle signaled the end of regulation.

But the storybook ending was not to be for the Red Devils, whose season ended with a 12-5 record.