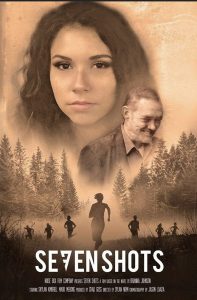 Click here to watch the trailer for Seven Shots, which was filmed largely in Gray Court and Fountain Inn.

The red carpet made its way to Gray Court Saturday night.

Of course, Hollywood’s glitz and glamour was still a couple thousand miles away, but creators behind the short film “Seven Shots” held a movie premier at Old Blue Truck Farms in Gray Court, welcoming around 200 guests for the event.

“A lot of friends and family helped us put this event on, and it’s still shocking to me – even in the week after the premier – it’s settling in how the community came together and supported this,” said Brianna Johnson, who wrote the novel “Seven Shots” that inspired the film. “I’m really honored and happy to see this happen.”

“Seven Shots” is a psychological thriller with a running time of about 50 minutes. The movie, which was filmed in rural Gray Court and Fountain Inn, was directed by Dylan Niemi and stars Skylan Kimbrell, Mark Meekins and Michael Sidney Shirley. Johnson and Niemi teamed up to write the screenplay.

Johnson said all of it with a small Greenville-based production crew from Noise Box Film Company was a team effort that reached into the community. 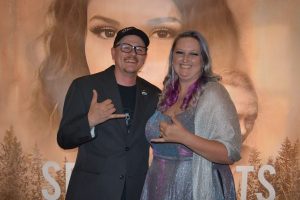 “We had fundraisers to get the film made and for the premier and everybody was rallying around us and pitched in to help,” Johnson said.

Saija Butters, who owns and operates the Arbitrary Art gallery and coffee shop in Gray Court-Owings, said the event was a great story for Gray Court.

“It was incredible to see how people came together to make this happen,” she said.

The story, which was published in novel form in 2020, follows protagonist Blair Saddler, who becomes the human prey of hunters who have turned hunting into bloodsport.

Johnson said she comes from a family of avid hunters, and that helped inspire the story.

“I thought, what if it was reversed, and the animals were the hunters? I can’t imagine the adrenaline or that type of fear,” she said.

The premier included a 33-by-33-foot screen and meet-and-greets with the cast and crew.