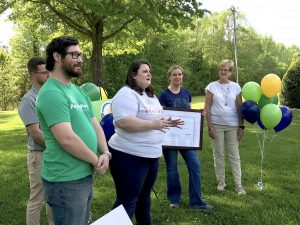 Laurens County, South Carolina – Laurens County is the newest affiliate for the Keep America Beautiful organization, and the ceremony which solidified the quest to become an official affiliate came in the middle of a weekend in which volunteers from across the county worked to make Laurens County cleaner.
“We had at least 50 volunteers, and that’s not even counting those volunteers from the City of Clinton and City of Laurens and Laurens CPW who volunteered to clean up during the day on Friday,” said Courtney Stonell, the director of the newly chartered Keep Laurens County Beautiful affiliate.
Over the two days, Friday, which was Earth Day, and Saturday, Stonell said a large amount of trash was collected by many people who care about where they live.
On the outskirts of Clinton, volunteers with Clinton Canopy and several Clinton employees worked up and down the entire length of West Corporate Center Drive, finding that even though it’s not a heavily traveled road, its close proximity to food retailers at either end mean it still had a great deal of trash. 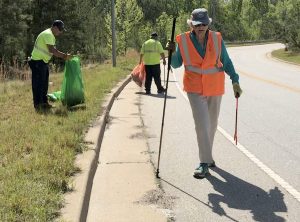 “I’m still collecting some of the numbers but as of right now we have that about 5000 pounds of trash was picked up throughout Laurens County, and that’s awesome,” Stonell said. “Clinton staff worked within and out in the outer edges of the city, and Laurens staff and Commission of Public Works staff were everywhere in Laurens.”
On Saturday more volunteers worked in all the municipalities and outlying towns and communities, and Stonell hopes to expand the reach next year.
“We’re doing something and people are noticing,” Stonell said. “This will be an annual event and we hope to get many of the businesses involved.”
On Friday afternoon, representatives of Palmetto Pride and Keep America Beautiful were at the Laurens County Chamber of Commerce to welcome Laurens County publicly as a a part of the Keep America Beautiful Organization.
“It was five years ago we started talking about creating a Keep Laurens County Beautiful affiliate of Keep America Beautiful, and it takes awhile,” said Mallory Coffey, East Region Director of Keep American Beautiful. “Now, for anyone who has visited here or who grew up here or who has a business here, this is exciting and an opportunity to bring communities and citizens together in ways that they’ve never been brought together before. And so today we’re celebrating your official birthday – the day that you celebrate Keep Laurens County Beautiful and officially joining the Keep America Beautiful Organization.”
Starting the organization takes funds, however, and Palmetto Pride representative Joseph Berry presented a check for $10,000 to help the new organization with its start-up fees, and giving it the ability to further the cause of beautifying the county.
“Part of the work that we at Palmetto Pride do is support our affiliate networks, not only just by being here and being a resource, but also giving resources,” Berry said. “Some of the resources we like to give are grants and one of the grants that we give to our affiliates is our affiliate startup grant.”

This story was originally published in the Wednesday, April 27 issue of The Laurens County Advertiser.