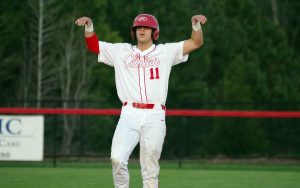 Davidson Pitts (11) turned in an 11th-inning hit and three innings of scoreless relief Tuesday night in a 6-2 win over Chapman for the region title. (File photo)

Clinton scored four runs in the 11th inning to to come away with a 6-2 win over Chapman and claim the Region 3-3A championship Tuesday night at Woodruff.

The two teams split their two regular season meetings, forcing the one-game playoff to determine the region champion and the top seed for the upcoming Class 3A playoffs.

Following a pair of bases-loaded walks, Davidson Pitts hit a two-out, two-run single with the bases loaded to give the Red Devils (19-4) a four-run cushion. Pitts also pitched three scoreless innings to end the game and pick up the win.

The game had been tied at 2-2 since the fourth inning.

The Red Devils will host the opening round of the district playoffs beginning next Tuesday against the No. 4 seed from Region 2-3A.

Laurens-Clinton, Part III cancelled: Friday’s previously scheduled game between the Red Devils and Laurens Friday night has been cancelled as both teams prepare for their upcoming playoff appearances. The game would have been the third between the two rivals this season. Clinton won the series and County Championship 2-0.

Clinton girls soccer update: Clinton will travel to Union to face Woodruff in a one-game, neutral-site playoff to determine the Region 3-3A championship Thursday. Game time is 6 p.m. The two teams split their two meetings during the regular season, accounting for their only conference losses.