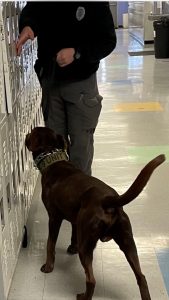 District 55 announced in a press release this past week that it plans to raise funds to purchase and train two K-9 “article” dogs. One K-9 would go to the Laurens Police Department and the other to the Laurens County Sheriff’s Office, both of which provide School Resource Officers for District 55 schools.

The school district has started a GoFundMe page in an effort to help raise the $20,000 to purchase and train the two dogs.

“LCSD 55 has a goal to provide one K-9 article dog for the Laurens County Sheriff’s Office and one for the  Laurens City Police Department. In order to do this, the school district is asking for community assistance with covering the associated costs,” the district’s release read. “A GoFundMe account has been established for raising the needed funds. Any additional funds raised beyond the required $20,000 will be directed to gun safety curriculum for students in kindergarten through grade 12, metal detectors and wands.”

District 55 officials and law enforcement agencies began meeting to discuss improving school safety after a string of three incidents in District 55 involving guns taken to schools by students and a threat in February and March.

“This is one of the ideas that has come from those meetings,” said Laurens Police Public Information Officer Capt. Scott Franklin.

“Article K-9s” are dogs trained to sniff out a variety of articles such as gun powder, weapons and other items. The dogs could be used to thwart guns being brought onto school campuses or help conduct grid searches to find someone who is lost, Franklin said.

“One of the recommended strategies is the addition of two K-9 article dogs that will be always at the ready and present in schools throughout the school district,” the District 55 release read.

LCSO Chief Deputy Chris Martin said the specifically trained article dog would be a welcome addition to the four K-9 narcotics dog currently in the fold at the LCSO.

District 55 officials said article dogs can be beneficial in a number of ways – on and off of school campuses.

“Every dog has their own discipline, but with an article dog, that would most likely be their only discipline,” he said.

District 55 sees the investment on the new K-9s as a step for the entire community in addition to the school district.

Utilization of the two K-9 article dogs will also extend into the community. The K-9s may be used  in the event of a bomb threat to a business or industry, in the retrieval of firearms used during the commission of a crime, during community events such as Squealing on the Square, and in various other ways as needed,” the District 55 release read. “The addition of these services will greatly aid in addressing safety in LCSD 55 and the community.”

The LPD currently has three K-9 officers – two Belgian Shepherds and a Chocolate Lab – while the LCSO has its four narcotics dogs as well as several bloodhounds.

LPD Capt. Dylan Sherfield, a K-9 handler, said there is no particular breed that is favored in article dogs.

“The public would probably more associate an article dog with a (Labrador Retriever),” he said. “But it could honestly be any kind of dog as long as it has the drive to do what we’re asking it to do.”

Anyone wishing to contribute to the district’s GoFundMe efforts can visit gofund.me/542496e7 or contact Assistant Superintendent for Pupil Services Jody Penland at 864-984-3568.