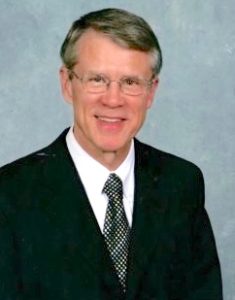 Henry Miles Faris, Jr., MD passed away April 24, 2022, after a lengthy illness. Born in Laurens, SC, Dr. Faris was the son of the late Henry and Anne Faris. He was a graduate of Clemson University where he was a member of Delta Kappa Alpha fraternity and was first honor graduate in his class, thereby receiving the annual Faculty Award. He continued his education at the Medical University of South Carolina where he also was first honor graduate in the class of 1967 and voted “most promising physician” by his classmates. His residency training in internal medicine was at the University of North Carolina, Chapel Hill, where he was named Resident of the Year and received the Golden Apple Award for excellence in teaching. Following a fellowship in infectious diseases, also at UNC, Dr. Faris was commissioned as Major into the US Army Medical Corps, serving as Chief of Communicable Diseases at Fort Benning, GA.

In 1973, Dr. Faris moved to Greenville and began a 40 year career in the private practice of internal medicine, primarily at Woodward Medical Center. During this period he authored numerous scientific articles that were published in major peer-reviewed medical journals. He also served as clinical investigator for multiple pharmaceutical companies. Dr. Faris was certified by the American Board of Internal Medicine. He was a member of the medical staff at St. Francis Hospital and Greenville Health System, having served as a medical staff officer and Department of Medicine chairman, respectively. His professional associations included: Greenville County Medical Society, South Carolina Medical Association, and American Society of Internal Medicine.

A lifelong Presbyterian, he was a member of First Presbyterian Church of Greenville. For many years he served on the Board of Directors and Advisory Board of the Greenville Area Parkinson Society. He enjoyed daily exercise and adventure travel with family and friends for decades before Parkinson’s disease took its toll. Dr. Faris devoted his life to his family and to his patients. He was an incredibly loving husband and father. His most cherished role was that of Granddad to his five grandchildren. Those who knew him best will remember his superior intellect, his quick wit, and his penchant for good conversation. Among his treasured possessions were many cards, letters, and poems from patients who became dear friends and whose friendships endured throughout his retirement years. His valiant struggle against Parkinson’s disease was indicative of how he always approached adversity with perseverance and fortitude. Such was the life of one blessed by God with Christian parents, a loving family, and supportive friends. To God be the Glory!