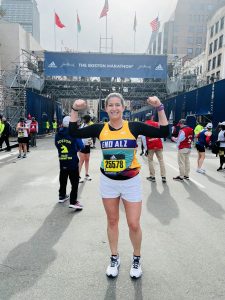 Kristyn Dees at the finish of Monday’s Boston Marathon.

Famed Heartbreak Hill was behind Laurens native Kristyn Dees Monday, but the Boylston Street finish line was a mile and a seeming eternity away.

That’s when the tears began to flow for Dees.

“I started crying when I hit the 25-mile mark,” said Dees of her final stretch in the Boston Marathon. “Everything just hit me – how far I had come and how much of an emotional journey it was. And I was just crying for the fact that I didn’t want to run another mile.”

Her legs “were done” at about the same time she reached Heartbreak Hill, a steep uphill climb near the Boston College campus around the 20-mile mark on the race course in the pre-eminent marathon in the U.S.

But legs or not, she never forgot why she was there.

Months earlier, Dees decided to run the Boston Marathon in honor of her father, Dan Dees, the longtime owner and operator of Piedmont Pest Control who suffers now from early onset Alzeheimer’s and dementia.

So, she went one more mile. Then another. And then another until all 26.2 miles were completed in five hours, 11 minutes and 56 seconds.

Dees said she had run for health reasons but had eschewed racing competitively, so deciding to run the Boston Marathon, which attracts the top distance runners in the world each Patriot’s Day, may have seemed an odd decision at first. 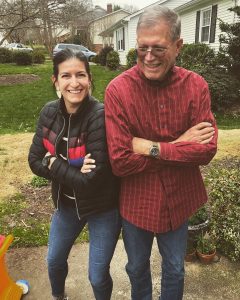 “I have a marathoner friend who told me I should enter the Boston Marathon, and I was laughing at her because I’d have to qualify for that race,” said Dees, a Laurens Academy alum who began running to train for basketball and volleyball and whose first competitive race was the Reindeer Run 5k in Laurens.

But runners for charity teams can get around that marathon’s qualifying rule, and the Boston Marathon routinely hosts teams of runners who raise money for a wide variety of causes, including the fight against Alzheimer’s.

“The Boston Marathon has one of the biggest Alzheimer’s charity teams of any race in the nation,” Dees said. “I began to think about it and decided that I may regret it if I didn’t at least try.”

So, Dees began training, running more and more and competing in a few half-marathons along the way. She also began fundraising for Alzeheimer’s charities, raising more than $21,000 by race day. 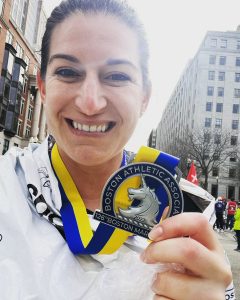 Kristyn Dees with her medal for completing the Boston Marathon. She also raised more than $21,000 to benefit the fight against Alzheimer’s Disease.

“The biggest takeaway for me was less with the race and more about the support of the people who knew my dad and in my own circle who came out and encouraged me during training and checking on dad and my family.”

All of it – the race, the support, the inspiration – added up to an emotional 26.2 miles through Boston on distance running’s biggest stage.

“I did something I really never thought I would do,” Dees said. “Throughout, it’s been a mental game of finish the mile and then to the next one, which might be harder but it will come, and I can finish that one, too.” 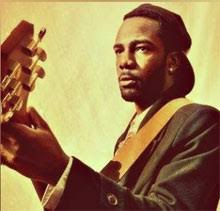