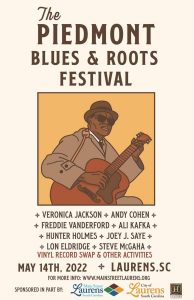 The inaugural Piedmont Blues & Roots Festival is coming into focus with a lineup of artists set to perform and other events on the schedule for the one-day event on May 14.

The festival has been two years in the making after initial plans for 2020 were interrupted by COVID-19.

“I’m just really happy that this has shaped up and that it’s really happening,” said Hunter Holmes, a Laurens native, musician and roots music aficionado who will be performing at the festival.

Chicago-based bluesman Joey J. Saye will be the last to take the stage on Saturday evening.

Holmes said he hopes the assembled musicians will be part entertainment and part living history lesson for  the current residents of Laurens County, which gave the world celebrated bluesmen Pink Anderson and Rev. Gary Davis.

“Everybody in the lineup is straight-up, true-to-the-core Piedmont Blues and related types of music,” Holmes said.  “One thing I want to see is people who are from here to hear the types of music that came from this area and redistribute that kind of music back into the community.”

While the festival will be centered around music, it will also feature select artisan vendors as well as other event such as a vinyl record swap, a biscuit cook-off and eating contest put together by the Laurens Parks and Recreation Department as well as a ticketed bourbon-tasting on Saturday evening.

Irick said additional information leading up to the festival can be found on the Main Street Laurens and City of Laurens Facebook pages. Piedmont Blues & Roots Festival social media pages are also expected to be launched in the near future, he said.