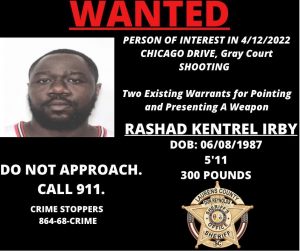 The Laurens County Sheriff’s Office is searching for a person of interest in a shooting that occurred Tuesday on Chicago Drive in Gray Court.
Rashad Kentrel Irby is wanted on two existing warrants for poinint and presenting a weapon and is a person of interest in the Chicago Drive shooting. Irby is about 5-11 and weighs approximately 300 pounds. He was last seen wearing a white t-shirt and gray sweatpants.
The shooting is believed to be an isolated incident with no perceived threat to the public, according to the LCSO.
Anyone with information Irby’s whereabouts is urged to call 9-1-1 and to not approach the suspect. Persons with information can also call CrimeStoppers at 864-68-CRIME.
Posted in Breaking News, News