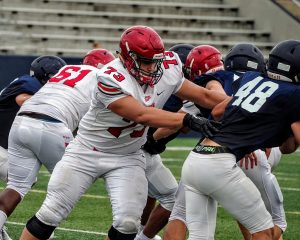 Clinton offensive lineman Peyton Pitts announced Friday on Twitter that he is committing to play football at Clemson.

“Thank you to my parents and family for pushing me in both the classroom and on the field,” Pitts said on Twitter. “I am thankful for my coaches, specifically coach (Corey) Fountain and (OL coach Mathew) Bennett for demanding the best from me every single day and helping me become who I am today.”
Pitts, listed at 6-6, 295 pounds, attended Clemson’s camp this past summer among others. He anchored an offensive line that helped the Red Devils to the third round of the 2021 Class 3A playoffs and 380.2 yards per game in total offense.
Recruiting Notes: Former Laurens running back Troy Dendy is in the transfer portal after two full seasons at Carson-Newman. Dendy ran for 1,387 yards (6.5 yards per carry) and nine touchdowns in 23 games with the Eagles. The former SAC Freshman of the Year picked up offers recently from Limestone and Chowan. . . . Clinton junior defensive lineman Hezekiah Kinard has picked up an offer from Anderson University. Anderson is to begin play in football in 2024 under head coach Bobby Lamb. . . . Former Presbyterian guard Rayshon Harrison visited James Madison this past week and Tweeted a decision on his transfer destination will be coming soon. Harrison led PC basketball in scoring the past two seasons. … Laurens will hold a signing ceremony on April 20. Raiders offensive lineman Kole Lawson is expected to sign with Erskine while baseball players Jackson Edwards will sign with North Greenville and Parker Clarke with Cleveland Community College in Shelby, N.C.
Story edited to correct first name of Clinton High School offensive line coach Mathew Bennett.
Posted in Breaking News, Sports