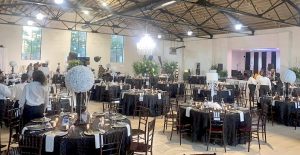 Laurens, S.C. – Johnny and Shenoa Cheeks recently opened their new event space in Laurens, and they are already seeing the fruits of their labor as requests for the historic armory on South Harper Street Extension outnumber the weekends.

Dubbed The Ballroom Weddings and Events, LLC, the couple has rescued the historic armory, and schedules for this summer are filling up. September is booked solid.

In other words, the once dilapidated old armory is getting a new life.

“There aren’t that many places to hold large events in Laurens, especially one that can 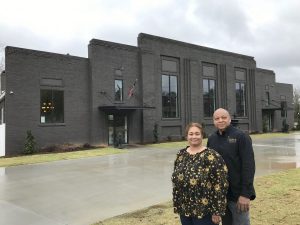 hold as many as this can,” said Cheeks on a rare morning when he and Shenoa weren’t cooking and helping to run A Taste of Home, their long- time and successful restaurant in Laurens. “I think this space will be good for Laurens.”

Cheeks had previously purchased about 12 acres beside and behind the old armory building, and Shenoa said he’d always hoped for an opportunity to purchase the 1930s-era armory.

“He would look at it and say, ‘Wouldn’t that make a great event space?'” Shenoa said. “He could just see it in his head, and he was right.”

After purchasing the acre lot, which is almost completely taken up by the vast armory, he began spending almost every evening after work doing all he could on his own – cleaning out decades’ worth of debris and making plans.

“The first thing I did was get the roof sealed,” Cheeks said. 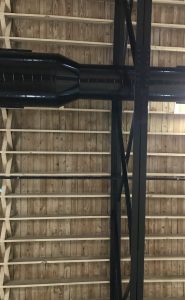 “As I had the money, I’d get a little more work done, so it took a year but we are finally here,” Cheeks said.

The building was used for a variety of purposes after the armory closed in the 1960s, Cheeks said. But over the years doors and windows were broken out, electrical wires were stripped and leaks in the roof had damaged the original hardwood floors. But the incredible wooden ceiling, built in the 1930s with its interlocking pieces, was still intact and beautiful, and the structure itself was sound.

He gradually hired professionals to install electrical wiring, air and heat, rebuilt and expanded the bathrooms, created bridal and groom’s rooms, installed new flooring, And being the cooks they are, adding a complete new restaurant-quality kitchen rather than a small catering kitchen typical of many venues.

During this past year, the couple has heard from a few naysayers assuming the business isn’t needed, expressing dislike of the dark color and even one person who feared it would cause nearby property taxes to increase. But for those handful of folks who couldn’t see the potential, Cheeks has had conversations with hundreds of friends and total strangers encouraging him about the venue space and excited that the Cheeks’ have breathed new life into the historic armory.

It’s very large, and right now he owns tables and chairs for 250, he said, but it’s simple to rent additional seating and tables if needed.

“The city codes have set the maximum capacity to allow 700, though I think seating for 500 would be best,” he said, and Shenoa added, “You have to have space for a dance floor.”

When the couple held their ticketed Grand Opening on March 12, all the tickets were sold well ahead of the event, and the Cheeks were gratified that the attendees enjoyed their food, danced to the band and stayed to enjoy themselves.

“All this last year people would stop by as I was here working and tell me they used to go to dances here, and a woman and her son came by and she said her husband used to work here as a National Guard officer,” Cheeks said.

Now, they’re excited to give that history back to the people of Laurens.

The couple has plans for additional features, such as a garden courtyard and an outdoor venue space in the back, but right now Cheeks is also turning his attention to a breakfast spot on Laurens’ south side.

“I love a good breakfast so I bought the old Harvest Market grocery on 221. There are other locations but I think this side of town needs a place to get a good cup of coffee and eggs and red eye gravy,” Cheeks said. “But that will probably be next year.”

This story was originally published on page 1 of the Wednesday, April 6 issue of The Laurens County Advertiser.