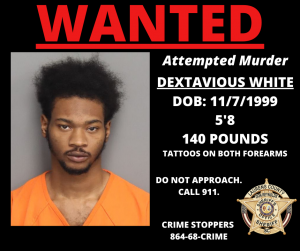 As of Tuesday afternoon, both men were still at-large.

Around 6 p.m. Monday, two men were involved in an altercation and one man was shot at the Nu Way convenience store in Waterloo following an altercation. The alleged assailant left the area on foot and was still being sought by investigators Tuesday afternoon.

Investigators identified the suspect in the shooting as Dextavious Laquez White of Waterloo. White is described as a black male, approximately 5-foot-8, 140 pounds with tattoos on both forearms.

White is wanted for attempted murder and possession of a weapon during the commission of a violent crime. 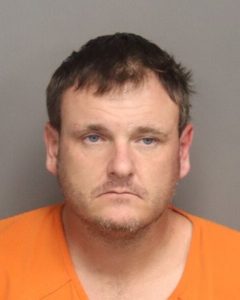 Earlier Monday, deputies posted on social media that that a law enforcement presence was in the Greenpond Road area of northern Laurens County in search of David Nathaniel Sentell, a white male, 6-foot-1, 185 pounds last seen wearing a charcoal hoodie.

This past December, Sentell was arrested by the LCSO and charged with third-degree assault and battery and possession of a firearm or ammunition by a person convicted of a felony.

Anyone with knowledge of the whereabouts of either Sentell or White are asked to call the LCSO or CrimeStoppers at 864-68-CRIME. 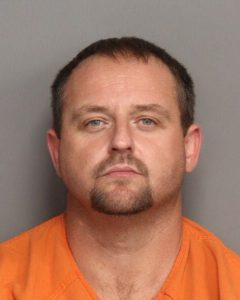 An arrest for domestic violence led to drug trafficking charges levied against a Clinton man by the Laurens County Sheriff’s Office, the LCSO said Thursday.

According to the LCSO, deputies learned of the whereabouts of Travis Aaron Jarnigan of Clinton, who was wanted on second-degree criminal domestic violence charges.

Deputies made the arrest on the CDV warrant on Patterson Drive in Laurens and the LCSO said they found 40 grams of methamphetamine in Jarnigan’s jacket pocket along with “a large sum” of cash and another 800 grams of meth in a vehicle Jarnigan had been in, according to the LCSO.

Jarnigan was charged then with tracking in meth (400 grams or more) along with two counts of second-degree criminal domestic violence.

Jarnigan was taken into custody without incident.