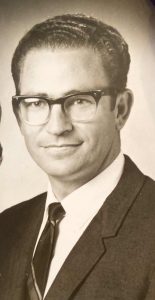 Rev. DeFoor was born in Westminster, SC, and grew up in Eastanollee, GA, as the second youngest of ten children. Called to pastoral ministry as a young man, he graduated from Furman University in Greenville, SC, in 1958. He married the late Eleanor Haulbrook in 1954, and together they had four children. He moved his family to Louisville, Kentucky, where he graduated from Southern Baptist Theological Seminary in 1969. Rev. DeFoor was pastor of churches in Georgia, Kentucky, and South and North Carolina. He completed his ministerial career as Senior Chaplain for the Allendale Correctional Facility in SC. His wife of 54 years, Eleanor, died in 2007. He wed the former Barbara M. Stephens, of Seneca, SC, in 2008.

Rev. DeFoor was a gifted preacher and teacher who in his pastoral ministry and beyond modeled a servant heart, a great love for people, and an awe-inspiring faith in his Creator God. He shared his love for the Lord faithfully, creatively, lovingly. He loved gardening and crafting with wood. Rev. DeFoor loved his family dearly.

A memorial service is planned for The Chapel at Martha Franks, on Saturday, April 30, 2022, 11:00 am. The family will receive friends after the service.

The family is deeply grateful to the staff of Martha Franks Retirement Community in Laurens, SC, for their love and care since 2019; to the staff of the South Carolina Baptist Ministries of Aging, a ministry of the South Carolina Baptist Convention; and to Lutheran Hospice of SC. In lieu of flowers, memorials may be made online to www.SCBMA.com, or mailed to “SCBMA, 190 Stoneridge Drive, Columbia, SC, 29210”.