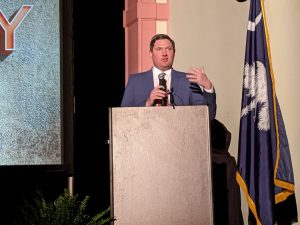 Laurens Mayor Nathan Senn broke new ground Tuesday with what he believes to be the first State of the City address given in Laurens.

“Tonight, we are gathered to renew our shared commitment to a better future for the City of Laurens,” Senn said, speaking to a group assembled at the Capitol Theatre in downtown Laurens.

Senn also said his reasons for presenting the address were to celebrate progress being made by the city and to share ideas on moving toward the future.

He noted several recent accomplishments, including more competitive wages for city employees and better retention, the hiring of a full-time municipal judge, a reduction in crime and capital improvements made using American Rescue Plan Act funds.

With those accomplishments, Senn also noted a recent uptick in population reversing a downward trend over the past 40 years that saw the city’s population decrease by nearly 2,000 residents.

“Growth is not out of control. But we are growing again for the first time in years, and that’s a good thing,” he said.

Senn called the progress made by the city “undeniable.”

The 19-page speech also advocated a balance between planned growth and staying true to Laurens’ small-town roots and called on local leaders to “work together with others to advance the interests not only of the City of Laurens but Laurens County as a whole.”

“We must do our part to make the city of Laurens the showpiece of our county – a county seat worthy of the people of this community,” he said. “This means working together with the county and the state to make strategic capital improvements.”

Before ending his speech, Senn called for a return to civility both in government and throughout the community, announcing a resolution passed by the Laurens City Council earlier Tuesday adopting “a policy of civility and decorum.”

“It’s our duty and privilege to carry on this culture of civility and kindness, and rather than hiding it, share it with each other, expand it and make it the hallmark of our city,” he said.

The City of Laurens also announced winners of three awards at the event: