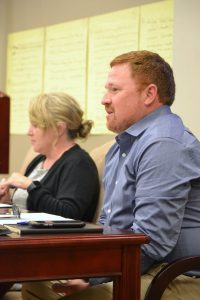 Brooks will not begin working for the city until May 1, but he sat next to interim City Manager Rebecca Vance, who said Brooks would be spending occasional days working to become familiar with the city during this period of transition.

Brooks has been serving as the Town Administrator for Saluda, where he’s worked for almost 11 years. He’s also worked in state and county government and as a consultant for renewable energy development. Council was meeting with Brooks Monday night to sign a contract. Mayor Bob McLean had explained Brook’s salary was set at $122,500 for a two year contract.

This week, on Monday evening, March 14, the city planned a public recreation meeting at the Clinton Community Building, 109 Ferguson Street. Presentations by the city and by city engineers about the planned recreation complex will begin at 6 p.m. and then members of the public can ask questions and provide opinions on which areas of the planned recreation complex they’d most like to see. The city has an online survey available on its Facebook page and printed copies will be available to the meeting.

Vance said the length of the meeting allows people to come and go as their schedules allow.

The rec complex is cost prohibitive as it is, so the city is seeking input to determine which elements of the $46 M plan to go construct.

Other business addressed last week’s meeting included the approval of first reading on an annexation request to annex property into the city limits for a new Starbucks location at Hwy. 72 E at the E. Corporate Center Drive.

Another request for rezoning a parcel on W. Bluford Street for a manufactured home died for lack of a motion.

Following executive session, council voted to authorize Vance to enter into an agreement with WK Dickson to develop a master plan and land use plan for Whitten Center property and additional city owned property. Council approved the motion unanimously.