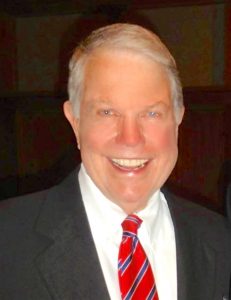 He was a native of Laurens, husband of the late Dora “Dodie” Wilkinson Hicks, and the son of the late James Edgar and Olive Fuller Hicks. He was a faithful and loving husband, father, grandfather, great-grandfather, known to his family as Poppi, as well as a beloved pediatrician to many. After graduation from Laurens High School, Jim attended the University of North Carolina at Chapel Hill as a Byrnes Scholar where he earned Phi Beta Kappa honors, then finished at The Medical University of South Carolina. He completed his medical internship at Greenville General Hospital, completing his pediatric residency at the Children’s Hospital of Philadelphia. He served in the United States Navy as a pediatrician and was Chief of Pediatrics at the U.S. Naval Hospital in Beaufort, where he was honorably discharged in 1964. He then went into private practice at the Wilson Clinic in Wilson, N.C. He moved to Greenville, to become a partner with The Children’s Medical Center. Jim served in private practice for 34 glorious years. He also served as the Chairman of the Department of Pediatrics at the Greenville Hospital System, an Assistant Clinical Professor at MUSC, as well as The Director of the Cystic Fibrosis Clinical Center in Greenville, In 2015, Jim received The Career Achievement Award from the South Carolina Chapter of the American Academy of Pediatrics.

Jim was a member of Mitchell Road Presbyterian Church.

Jim was predeceased by his parents and loving wife, Dora Wilkinson Hicks, along with his two sisters, Anne Wallace “Wally” Bramlette of Atlanta, Ga. and Jane Dail Roper of Laurens.

A funeral service will be held at 11 a.m., Saturday, March 19, at Mitchell Road Presbyterian Church, 207 Mitchell Road, Greenville, SC 29615. A celebration of life gathering will be held in the fellowship hall after the service, followed by a private burial at Woodlawn Memorial Park.

In lieu of flowers, please direct any gifts to Mitchell Road Presbyterian Church for benefit of Missions.

Fond memories and expressions of sympathy may be shared at www.mackeycenturydrive.com for the Hicks family.