Clinton , S.C.  – On the campus of Presbyterian 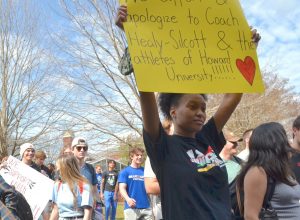 College last week, a group of students from the Multicultural Student Union (MSU) scrambled and brought together almost 250 students, faculty and administrators to show the Clinton community and the PC family that unity, love and diversity can co-exist.
The Thursday morning “Unity Walk” was in response to an incident which made national news two weeks ago when a few white males in Hoseville, the campus area just outside Bailey Memorial Stadium, used misogynist and racial jeers to taunt Howard University lacrosse players as they disembarked from their bus prior to a match with PC.
“This idea came from one of the football players,” said MSU President Enia Woodard. “Suubi Mutebi is on the executive committee for MSU and he’s the one who suggested we do this. We had to pull it together in about two days because it had already been two weeks and we didn’t want to lose the momentum.” 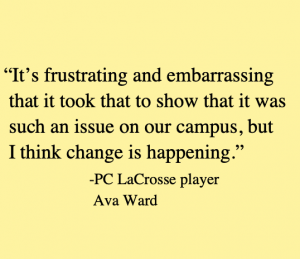 It was a necessary event, Woodard said, because the incident had mortified more than just the Howard lacrosse team and coach.
“The (PC) athletes of color and women athletes were devastated that this happened to other athletes of color from another school,” Woodard said. “They wanted to bring awareness and show that we are a team across the board. We wanted to do this Unity Walk to show we are trying to find diversity in an environment of unity.”
Members of the PC lacrosse team were already representing their sense of community as they gathered in their Clinton Tough lacrosse T-shirts, and members said it was powerful to see the large numbers of students who were steadily gathering on the lawn behind Neville Hall.
“I think it shows how important the issue is,” said Ava Ward. “It’s really great to see so many people showing up.”
“With a school that is about 50 percent athletes, it’s really cool because we can identify all the different teams believing in the same message,” said fellow lacrosse junior Abby Edmisten.
Ward said the large numbers at the Unity Walk 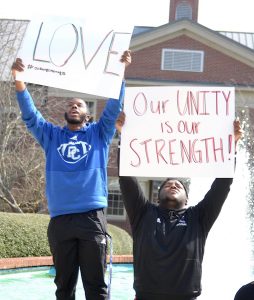 were indicators that some positive results are happening in response to what was a terrible incident.
“It’s frustrating and embarrassing that it took that to show that it was such an issue on our campus,” Ward said, “but I think change is happening.”
As for the MSU, Woodard said the organization wants to expand its partnerships with other groups on campus so that the momentum is not lost.
“We do a lot with the student NAACP group,” Woodard said. “The MSU is more geared toward outreach and we plan events, and the NAACP partners with it because they are more about education. So we already partner a lot with them but we need to do more. We want to provide more opportunities for students to connect with each other and that’s where we will start.”
Mutebi, the football player who broached the Unity Walk idea, told the gathered students it was important that the PC act out of the need for understanding and diversity.
“This is community,” Mutebi told the students, faculty and administrators. “We don’t want to lose this momentum.”
During a pause in the walk, students gathered in front of Greenville Dining Hall where from the porch, Mutebi and other student leaders read quotes from famous people of color who had faced and overcome hardships.
“We wanted that to be a really powerful moment and we wanted it to be at the dining hall where all of us gather every day,” Woodard said. “That’s our start – creating opportunities and social events for all of us to be together.”

This story was originally published Page 1 of the Wednesday, March 2, 2022 issue of The Laurens County Advertiser.