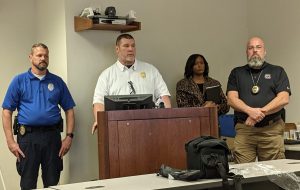 Laurens Police Lt. Scott Franklin speaks during a press conference after a 6-year-old student was found in possession of a gun at Laurens Elementary on Feb. 18.

“We were there to throw some ideas around,” said Laurens Police Lt. Scott Franklin, the departments public information officer. “We wanted to see along with the district and the (Laurens County Sheriff’s Office) what we could do.”

On Friday, Feb. 18, a 6-year-old boy at Laurens Elementary School brought a loaded handgun to class where a staff member found it on his desk. The child’s 72-year-old grandfather was subsequently arrested and charged with unlawful conduct toward a child for allegedly allowing the child easy access to the weapon.

On Tuesday, Feb. 22, a 14-year-old Laurens District High School student was arrested and remanded to the custody of the Department of Juvenile Justice after he brought a handgun to school in his book bag.

No one was injured in either incident, but Franklin – speaking on the District 55 podcast with Superintendent Ameca Thomas – said law enforcement has to take any such occurrence seriously.

“We take this stuff very seriously,” Franklin said. “We have to respond as though it’s the worst case even though it may not be.”

Franklin also said parents, teachers and staff need to stay engaged with students and be aware of behavioral changes – something even as subtle as a change in the types of clothes the child might wear can be a clue as to changes going on inside the child’s mind or emotions.

He also urged education and training about guns and other weapons for parents and students.

The discussion with District 55 officials included ways to accomplish that.
“We hope to install some sort of training between the schools and the police department and maybe an outside agency or two,” Franklin said. “We hope to have some events where we have some education and some training for the parents, and for the kids and for the staff so that everybody can be on the same page and know what to expect before the worst can happen.”

Franklin also said he is already in discussions with Project Childsafe, a firearms safety education initiative put together by the National Shooting Sports Foundation.

Project Childsafe works with law enforcement, educators and others to teach about firearms safety, while also providing tools such as gun locks to parents.

“We want to do some locking events and provide some home safety kits and training that will all be free of charge, so we’ll be setting something like that up for the future.”

Franklin will also be speaking at a virtual meeting of the District 55 Parent Academy on April 7.

On last week’s District 55 podcast, he said educating parents is a big part of keeping children from bringing guns to school.

“One thing we can all agree on is that we want our children safe,” he said. “It’s paramount in our thoughts, and prevention begins at home. It’s incumbent upon those parents that if you have a weapon in the house – it doesn’t have to be a gun – that weapon needs to be secure, and there needs to be some education (about it for the children). Education is very fundamental when it comes to weapons of any type.”