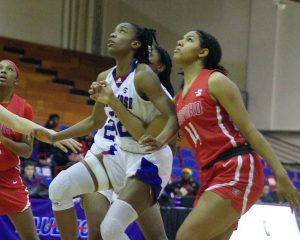 CHARLOTTE, N.C. – Jade Compton and Paige Kindseth combined for 45 points as the Presbyterian Blue Hose rallied to defeat the Winthrop Eagles 65-60 Tuesday afternoon in the first round of the Big South Conference Tournament at Bojangles Coliseum.

Trailing by six with 2:45 left in the third quarter, PC went on an 11-2 run to take a 45-42 lead heading into the fourth quarter and held on for the victory.

“This was a gritty come from behind win by our team,” PC coach Alaura Sharp said. “Winthrop does a good job playing physical which took us out of our game at the start so a lot of credit to them.”

Jade Compton led the Blue Hose (12-17) with a game-high 24 points, and Paige Kindseth, who scored the last six points of the third quarter, finished with a season-high 21.

No. 9-seeded Winthrop had beaten No. 8 PC 58-42 in the only meeting between the two teams during the regular season.