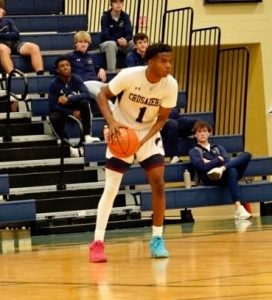 Diamonte Grant, Laurens Academy’s high-scoring senior forward, and Tinique Austin, a force inside for Clinton High, have been named Laurens County Basketball Players of the Year.

The Coaches of the Year are Eddie Romines of the Clinton boys and Jason Marlett of the Laurens Academy girls.

The all-county teams are a joint project of LaurensCountySports.com and The Laurens County Advertiser with the assistance of the county’s varsity head coaches.

Grant, who was also an all-region selection, led the Crusaders in scoring, rebounding and blocked shots with 15 points per game along with 7 rebounds and 2 blocks per contest. His final game may have been his best. In a second-round playoff loss to defending SCISA Class A state champion, Grant scored 20 points on 9 of 12 shooting with four 3-pointers.

“Diamonte is a great competitor and was instrumental in a number of big wins for LA,” said Crusaders head coach Travis Plowden. 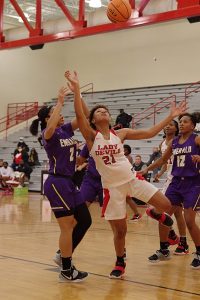 Austin was an ever-present force for the Red Devils on both ends of the floor over the past two seasons and was named team MVP this season after averaging a double-double with 11.5 points and 10 rebounds per game. She finished with 835 rebounds for her career.

“(She was) relentless on both ends of the floor, especially on the glass,” Gardner said. “(She was) always willing to be physical and do the dirty work.”

Here is the rest of the all-county teams: 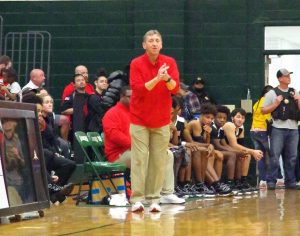 The 2021-22 season brought about a resurgence for high school basketball in Laurens County and with it a plethora of viable County Coach of the Year candidates.

But in the end, Clinton boys coach Eddie Romines and Laurens Academy girls coach Jason Marlett were chosen for the honors.

But it wasn’t an easy choice as Laurens’ Tommy Spires in his first year and Aianna Kelly in her second led the Raiders to respective playoff berths. Lauren’s Academy boys coach Travis Plowden also led the Crusaders back to the SCISA playoffs, and Clinton girls coach John Gardner had the Red Devils in the Class 3A Top 10 before COVID-19 and injuries led to a late-season swoon by Clinton.

Coming off a one-win season, Romines guided Clinton to a second-place finish in Region 3-3A. The Red Devils 13-7 improved their win total by 12 games.

“At the beginning of the season, our goal was to make the playoffs but we weren’t even thinking about a home playoff game, but we were able to do that,” Romines said.

“This is an honor, but this is a team award,” Romines said. 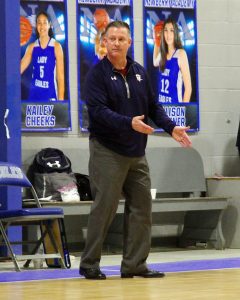 Like Clinton’s boys team, the LA girls returned to the playoffs after a one-year absence from the SCISA Class A state bracket.

“Looking back, I’m really pleased with our progress and how they competed every single night just trying to improve,” said Marlett, whose Crusaders finished with a 17-11 record and captured a No. 2 seed in the SCISA Class A tournament. “We have a lot of good young players who will be returning, so I’m already excited about next year.”

Marlett also said the Crusaders’ progress was good to see following an 8-13 record during a 2020-21 season marred by COVID-19-related shutdowns during which LA was never able to find its footing.

Like Romines, Marlett shared the award with his players and assistants Sandy Moore and Reagan Williamson, a former LA player under Marlett turned assistant coach.