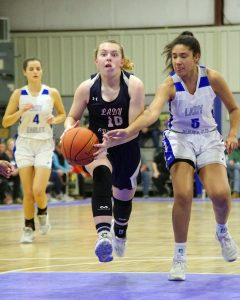 The Laurens Academy girls are back in the SCISA Class 1A state tournament. Five of six varsity prep teams qualified for the playoffs this year. LA’s Olivia Huck (10) in action Monday during the SCISA Region 1-1A finals.

Basketball playoffs were little more than a rumor for local high school teams a year ago, but things have changed for the better a year later.

The Laurens boys have returned to the playoffs after a six-year absence under first-year head coach Tommy Spires, while second-year head coach Aianna Kelly has the Raiders girls in the playoffs.
Both LDHS teams are No. 3 seeds from Region 2-4A.
Meanwhile, Clinton, which won one game a year ago, captured the No. 2 seed behind Union County in Region 3-3A, beating Woodruff twice on successive nights last week to button down the second spot and a home playoff game Wednesday.
In SCISA, Laurens Academy’s boys and girls also find themselves in the state playoff field after fighting through tough Region 1-1A competition.
“We play in the toughest region in the state, so I feel like we should get a pretty good seed (in the state tournament),” said LA girls coach Jason Marlett.
The LA girls (16-10) lost 51-32 in Monday night’s SCISA Region 1-1A finals to defending state champion Newberry Academy. The LA boys (15-9) lost Saturday in the region tournament semifinals.
SCISA was expected to announce its state tournament brackets for Class 1A Wednesday.
The Red Devils (13-6) showed the most marked improvement, winning a dozen more games than during their 1-17 season in 2020-21.
They will host Region 2-3A Powdersville Wednesday at 6 p.m., and head coach Eddie Romines said he is confident in his improved team.
“(Powdersville is) good, but I feel like we are capable of winning the ballgame,” Romines said.
LDHS is set to open the Class 4A playoffs Thursday at Easley. Tip is at 6:30 p.m.
The Raiders were 10-15 in Spires’ return to the LDHS bench. He was a former assistant under Mark Freeze.
LDHS showed flashes during the season but saved one of its most disappointing performances for the regular-season finale against Greer, a 66-53 home loss.
“We’re still searching for consistency with this team,” Spires said.
Even so, the Raiders held on to the No. 3 seed from Region 2-4A they carried into the week.
So did the LDHS girls (6-12) despite a 56-36 loss to visiting Greer to end the regular season. The LDHS girls are set to travel to Westside at 6:30 p.m. Wednesday for the opening round of the Class 4A playoffs.
Posted in Breaking News, Sports