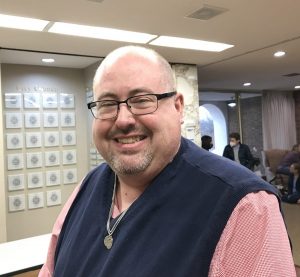 Among Clinton City Council’s business Monday afternoon was the adoption of a resolution accepting the City of Clinton Facade Improvement Grant Program, which will allow matching grants up to $10,000 in financial assistance for owners of private business property within the city’s historic downtown boundaries.
Two years ago the funds were pegged for just this type of use following a land sale, and the city’s new Main Street Clinton Manager Joe Timmons has helped develop the program and will assist in implementing it as well.
“It can be a concern to take on a project like new windows, for instance, because the cost can be really high, but the facade grant can cushion the amount,” Timmons said. “The development of the program was a combined effort with (Interim City Manager) Rebecca Vance and (Clinton Economic Development Director) Marvin Moss, and the funds had already been set aside for the program.”
Timmons began work at the City of Clinton two weeks ago, taking over the duties from Adele Alducin, who stepped down late last year. A Gray Court native and a graduate of Laurens District High School and Lander University, Timmons worked as a high school teacher several years before serving for many years as a Main Street Manager for Lancaster. With family still in Gray Court, he was happy for the chance to return to Laurens County.
Facade grant applications can be used for a wide variety of facade improvements, including the removal of false facades, signage and other options. The full facade grant agreement and program guidelines are online at the City of Clinton website, cityofclintonsc.com, or by emailing Timmons at jtimmons@cityofclintonsc.com.
While the facade grant program will bring improvements to the Clinton Historic Downtown, Timmons said he’s already looking forward to the events which will provide the quality of life aspect so important to the community.
There will be numerous free events coming up, Timmons said, but the first event will be a ticketed dinner theater at The Cotton Loft on Saturday, April 2, offering a three course dinner, four beverages and an interactive Murder Mystery Dinner Theater.
“It’s called the Best Murder in the World,” Timmons said, “and actors will be right next to your tables and diners get involved. It includes a full dinner and beverages and it’s very interactive.”
It’s an event that had become very popular in Lancaster while Timmons was serving as its Main Street events coordinator.
Timmons said there will be numerous free festivals and programs for the people of Clinton to enjoy, but occasional ticketed events like the dinner theater can introduce those outside the city to what Clinton has to offer.
“We’ve had these in Lancaster for years and people came from Charlotte and Columbia and Lexington,” Timmons said. “They would drive an hour and more to see the shows. So events here will bring people to see the beautiful town of Clinton, and these events better the quality of life for Clinton citizens as well.”
Tickets for the Murder Mystery Dinner Theater are available at www.cityofclintonsc.com.

Originally published on Page 4 in the Wednesday, Feb. 9 issue of The Laurens County Advertiser.