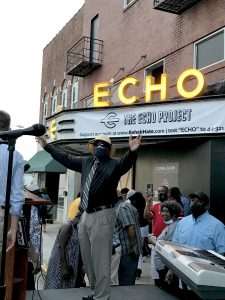 In late May, 2021, Rev. David Kennedy welcomed guests as The Echo Project was officially launched with the lighting of the Echo marquee.

Laurens, S.C. – Rev. David Kennedy and his congregation’s Echo Project have been on the national stage before, and that was the case again Tuesday morning when Kennedy was interviewed by The Today Show host Craig Melvin for the beginning of Black History Month.
Melvin visited Laurens in the fall to begin filming the five-minute segment, which is now available to see online at The Today Show’s website.
Melvin, who grew up in Columbia, said he had never heard of The Redneck Shop and the discord the business had caused in Laurens, and he told Kennedy he pushed to be able to do the interview for the NBC morning program.
During the Tuesday morning program, Melvin recounted some of the history of the theater, from its time as a segregated facility to its eventual closure, and then the turmoil that ensued when it was purchased and opened in 1996 as The Redneck Shop and Klan Museum.
Melvin also summarized Kennedy’s friendship with former Klan member Michael Eugene Burden, who later sold the title to Kennedy and the congregation of New Beginning Missionary Baptist Church.
In late May of 2021, The Echo Project was officially launched with the re-lighting of the Echo’s neon signs, which had been dark through all the years since the doors had closed as a theater.
The ECHO project has received assistance through national and international exposure before and on Tuesday evening Kennedy said calls had already come in with new donations totaling several thousand dollars.
With the assistance of architect Michael Allen and the guidance of project directors of The Paratus Group in New York, Kennedy said the work is going slowly and carefully to make sure The Echo Project becomes the place of diversity and healing that his congregation wants to see in Laurens.
“Andy Klemmer with The Paratus Group told me, ‘This is your moment to design the building that’s needed to facilitate forgiveness and bring people together.’ And that’s my dream ever since I was young,” Kennedy said.
“When I was young growing up in Laurens, I saw so many things that were harmful, but when this building is completed, I believe, and the people helping us believe, that people will come from around the world.” Kennedy said. “I think it can create a lot of business for Laurens and create a lot of love.”
To donate and learn more about the project, go to www.rehabhate.com.

This story first published page 1 of the Wednesday, Feb. 2 issue of The Laurens County Advertiser.