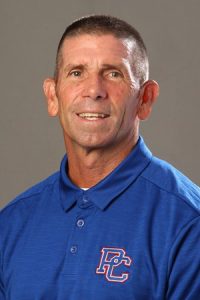 Former Presbyterian head coach Tommy Spangler is back in college football after one season away.

Spangler was fired after the 2021 spring season brought about by COVID-19. He led PC to its first winning season since 2014 at 4-3. He was replaced by successful high school coach Kevin Kelley from Pulaski Academy in Arkansas. Kelley resigned after a 2-9 season.

“I am really excited to announce the addition of Tommy Spangler to our football staff,” said Hendrix. “He brings a wealth of knowledge and experience as a head coach, defensive coordinator, and special teams coach to our team. I have always been impressed with the job he has done, and I couldn’t be happier to have him in our program.”

Spangler spent this past season as a volunteer assistant coach at Clinton High School, helping the Red Devils into the third round of the Class 3A state playoffs.

After the announcement was made, former PC players and coaching colleagues weighed in on the hire on social media.

“This is awesome,” said Greenwood head coach Chris Liner on Twitter. “Always loved Furman and hiring Coach Spangler made it even better.”

Former PC defensive back Colby Smith, who is currently in the NCAA Transfer Portal, also praised the hire.

“A great coach, but an even better man,” Smith Tweeted. “He deserves this more than anyone.”

“So happy to see this, such an amazing coach that will do so much for Furman and for all the players,” former PC offensive lineman Michael Jubran, who transferred to Georgia Southern, said on Twitter.

Spangler spant 10 years as a head coach at spanning two tenures (2001-06; 2017-20). All told, his coaching worksheet covers 37 seasons, nearly all at the collegiate level. He played defensive back at the University of Georgia, from which he graduated with a degree in physical education in 1984.

He began his coaching career at his alma mater in 1985, serving as a graduate assistant for two years prior to accepting his first full-time coaching position at Georgia Southern (1987-89). In 1990 he was named the Eagles’ co-defensive coordinator, and in 1992 took over complete control of Georgia Southern’s defense, remaining in that capacity through the 1996 season.

During his time in Statesboro he played a key role in the Eagles winning a pair of NCAA I-AA (FCS)national championships.

In 1997 Spangler accepted the defensive coordinator and assistant head coach’s position at PC, serving in that capacity for four seasons before being named PC’s head coach in 2001. In six seasons as mentor, Spangler coached the Blue Hose to a 42-24 record, including a 28-14 South Atlantic Conference (SAC) slate.