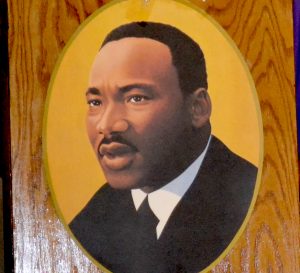 of several schools and rising COVID numbers, the Martin Luther King Day Celebration Parade and Commemorative Program planned by the Sanders Alumni has been postponed until a later time.

The Laurens Branch of the NAACP is holding its annual  MLK Freedom Fund program virtually on Saturday evening, however. For information call Carolyn Shortt, 864-923-1024.

Sanders High Alumni board member Elma Morrison said since the program and pop-up shops were cancelled, it made sense to cancel the parade as well.

The DHEC vaccine clinic, however, will go on as planned at 1010 Park Street, not far from Sanders Middle. (See information below.)

“The school called Wednesday and since all school activities have been cancelled, it wouldn’t work for us to use the Sanders Middle School Auditorium and Gymnasium this weekend,” Morrison said. “It’s understandable and we hope that we can hold the program late this month. But if we can’t then we talked with Mayor (Nathan) Senn about possibly combining it with the Juneteenth Celebration the city was planning this summer.”

The City of Laurens, CPW and Main Street Laurens were partnering with Sanders Alumni Association for the first time this year to expand the parade route through the Historic Courthouse Square and give prizes for float design and use of the theme, “It starts with me to keep the dream alive.”

One activity will still continue, however, and that is the DHEC  and the S.C. Department of Education Vaccine Clinic from 9 a.m. to 1 p.m. It has been moved to 101 Park Place, just across E. Farley from Sanders Middle School.

The vaccine clinic will occur at 101 Park Place, Laurens, inside the Bridging The Gap facility, and vaccines and boosters of all types, including pediatric, will be available free of charge.

At the same time, student and parent leaders from the Bridging the Gap HYPE Team will bag a large number of vegetables and other perishable foods which will be given away in a drive-through system to those who are getting vaccines, and to others who come and can show proof of vaccination.

“We are calling it the MLK Harvest and Saving Lives Vaccination  Clinic,” said Bridging the Gap director Calvin Whitmire. “If we reach 100 vaccines, then everyone will be put into a drawing for a free 50-inch television.”

Whitmire said grant funds are being offered to vaccination host sites for incentives, and those funds helped cover costs of the food and television giveaway.

Everyone will be masked for safety.