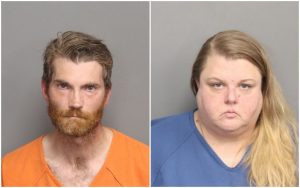 A Clinton couple has been arrested by Laurens County Sheriff’s Office investigators and charged in connection with the sexual abuse of a child.

According to the LCSO, Randall James Holdway, 38, has been charged Tuesday with three counts of criminal sexual conduct with a minor, disseminating obscene material and third-degree sexual conduct with a minor. Kathi Holdway, 43, was arrested and charged with unlawful neglect of a child. Randall Holdway remains in the Johnson Detention Center on $100,000 bond on each of the five charges.
The investigation into the incidents began in December by the LCSO along with the South Carolina Department of Social Services, which had discovered “concerning” messages sent to a juvenile. The juvenile was immediately removed from the home.
Anyone with information concerning those involved are asked to call LCSO Investigator Kanipe at 864-984-4967.
Posted in Breaking News, News