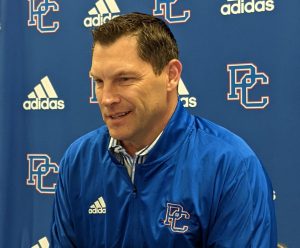 Steve Englehart has been here before.

He saw Presbyterian College’s Bailey Memorial Stadium from the visitor’s sideline in 2016 in a less-than-memorable 24-7 Blue Hose loss to Florida Tech.

But Englehart, who had started the Florida Tech program from scratch in 2013, never forgot his initial visit to Clinton and the PC campus.

“I’m excited to be here. I’ve had my eye on this place – believe it or not ­– since we came here in 2016,” Englehart said Tuesday morning during a meeting with some local members of the press. “I really thought when we came on campus that this is a nice little place and, you know, it seemed to me like the facilities were good, and I know Harold Nichols and Tommy Spangler both did a great job. And I know there are different challenges.”

Englehart was the first and only head coach in Florida Tech history before financial burdens caused by COVID-19 forced the school to cancel the NCAA Division II football program before the 2021 season.

At PC, he becomes the 16th head coach in the 109-year history of Blue Hose football, but the third in less than a year. Englehart, a two-time Gulf Coast Conference Coach of the Year, replaces Kevin Kelley, who was 2-9 in his lone season at PC.

Kelley took over following the 2021 spring season during which the Blue Hose went 4-3 under Spangler for the program’s first winning season since 2014.

Spangler was unceremoniously fired the day after returning from a win over Drake in Iowa, paving the way for the ill-fated experiment with the analytics-driven Kelley and his “never-punt” philosophy.

Englehart met with his players Monday night, some of whom are already in the NCAA’s transfer portal. In addition to a late start recruiting at the high school level with National Signing Day less than a month away, Englehart said he is re-recruiting players on the roster and those thinking about transferring.

After a season with several aspects of “non-traditional” football under Kelley, Englehart is expected to be a coach closer to the norm at PC, which will once again roster tight ends and punters.

After a year off from coaching, part of which he spent watching son Ty compete as a senior quarterback in high school, Englehart said he and his yet-to-be-completed staff are “working 24/7” to get caught up with recruiting and setting the tone for returning players.

PC’s 2022 schedule has not been announced in full, but Englehart said he sees clearly the challenges ahead.

“We have a few tough games starting off, but the non-conference games are going to be a challenge,” he said, adding that he wants to rebuild a PC program with strong recruiting efforts at the high school level across the region and in a home state that he believes to be undervalued.

But it is PC, not Hogwarts.