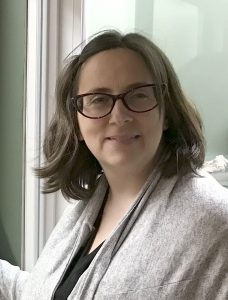 Laurens, South Carolina – A tree seems to grow from the floor and into the rafters of the Witherspoon Building, the newly-completed permanent home of the Laurens County Museum which welcomed hundreds of guests last weekend with a fundraising gala Friday and a grand opening on Sunday, Jan. 2.

The “tree room” is an impressive installation and includes a woodland closet, complete with a Laurens County petroglyph. It was created by museum staff member and artist Chris Pennington and museum executive director Laura Cook.
The room’s significance, however, is the fact that the Crawford Collection of Native American artifacts finally has a permanent location. That was especially meaningful to Ginger Crawford Phillips, a Spartanburg resident and daughter of the late Dr. Robert Crawford.

“We grew up doing this with our dad,” Phillips said of walking the Crawford farm, explaining how her dad could spot a projectile point from the smallest piece of rock in the ground. “This means a lot because he never wanted the collection to be split up. He 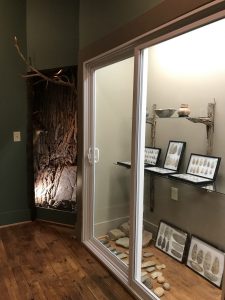 always wanted it to stay together and it finally has a permanent home.”
To Board Chair Carolyn Shortt and board members who worked thousands of hours on fundraising, last weekend’s opening on the south side of the public square in Laurens was like a dream come true.
“We are appreciative to our board, to our volunteers and also none other than our executive director, Laura Cook, and a special thanks to Chris Pennington and to Phil Adair,” said Board Chair Carolyn Short, referring to the late Phil Adair, who served as board chair when renovations began on the Witherspoon Building after its donation in December 2012. Adair passed away on Dec. 19.
The Laurens County Museum has been designed so that most of the exhibits will not be static, but rather rotated out with artifacts currently in storage. Among the largest of the current displays, however, are the recognizable bottles and other items from the Laurens Glass Plant. 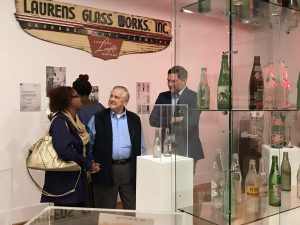 Laurens native Jaqueline Williams stopped by the glass plant displays more than once, recalling her father’s career there as a forklift operator and her fond memories of the family day picnics. She only wished she still had her green-tinted souvenir Coke bottles.
Laurens City Councilman Johnnie Bolt talked about the five years he worked there after leaving high school, and his work during the time the company produced the never-used commemorative bottles commissioned in 1963 by then-Vice President Lyndon Johnson.
“I was working in packaging, and they’d made and printed them and shipped about 2400 of them to be filled and taken to Johnson’s ranch for a dinner,” Bolt said. “President Kennedy was coming to Dallas and (Johnson) was evidently hosting a big dinner for him.” 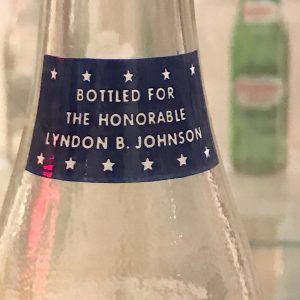 The dinner was to be held in November 1963, but when Kennedy was assassinated prior to the event, plans were canceled and the bottles were never opened.
“They were supposed to all be destroyed but there were a few left,” Bolt said.
“The Glass Plant was so important to Laurens County,” said Laurens Mayor Nathan Senn. “I think almost every family in Laurens has a story about the glass plant and it’s my favorite exhibit.”
Board member Debbie Vaughn said she expects the museum to soon be open Tuesday through Saturday afternoons from 3 to 5 p.m., but the volunteer schedule is still in flux.  Entry for the non-profit museum will be free of charge.
“It would be good if people would call first during these first couple of weeks to make sure,” Vaughn said. “It takes a whole village of volunteers!”
The number for the Laurens County Museum is (864) 681-3678.

This story originally ran on Page 1 of the print edition of The Laurens County Advertiser, Wednesday, Jan. 5.