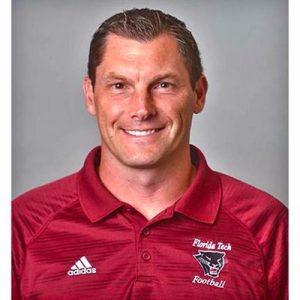 Presbyterian College hired its second head football coach in less than a year Monday with the announcement that former Florida Tech coach Steve Englehart will take over the helm of the Blue Hose.

Englehart, who built the NCAA Division II program at Florida Tech up from nothing, becomes the 17th head coach in PC’s 109-year football history, replacing Kevin Kelley who resigned in early December after one 2-9 season.

“We set out to find an experienced and principled leader who will elevate PC football in a manner consistent with the College’s mission and purpose,” Presbyterian Director of Athletics Rob Acunto said. “Steve’s head coaching experience, consummate professionalism, vision for the program, and proven ability to connect with players, alumni, and members of the community are just some of the many attributes that will allow him to elevate the football program.”

Englehart, a two-time Gulf South Conference Coach of the Year recipient, has compiled a record of 70-49 during his 13-year head coaching career at Rose-Hulman Institute in Terre Haute, Indiana and at Florida Tech.

He guided both programs to the NCAA Division II playoffs, but found himself without a job following a 2020 season when Florida Tech mothballed its football program citing revenue issues caused by COVID-19.

“I am extremely excited to become the next head coach at PC,” Englehart said. “My family and I would like to thank President vandenBerg, athletic director Rob Acunto, and the search committee for this great opportunity. I look forward to building relationships with our players and helping them develop in all aspects of their life.”

A native of Terre Haute, Englehart played and began his coaching career as an assistant at Indiana State. He was then hired by neighboring Rose-Hulman – first as an assistant and offensive coordinator and then in 2006 as head coach. At that time, he was the youngest head coach in the NCAA at any level.

At Rose-Hulman, he guided the Fightin’ Engineers to four-straight winning seasons.

“We will have young men that compete to win in the classroom and on the football field,” Englehart said of his first Division I opportunity at PC. “Our staff will provide stability and will be committed to providing a product that the alumni of PC and the Clinton community will be proud of. I can’t wait to get started.”

Englehart’s hiring came after a national search conducted by the Parker Executive Search firm, working with a search committee including PC faculty, staff, coaches and members of the College’s Board of Trustees. The search committee decided unanimously to hire Englehart as PC’s next football coach following an extensive review of a pool of 120 candidates.

Former PC football players and members of the Board of Trustees Tom Free (Class of 1991), Ted Pitts (Class of 1994), and Brad Spearman (Class of 1985) played key roles on the search committee.

“We are excited to welcome Coach Englehart to the PC Family,” Pitts said. “The Search Committee talked to a lot of strong candidates, but Coach Englehart stood out with his proven track record of success as a college head coach. He shares PC’s values and comes prepared knowing what it takes to recruit, develop, and win at an institution like PC.”

“I am confident in Coach Englehart’s ability to lead our football team and to embrace PC’s rich culture, storied traditions, and championship spirit,” he said. “I look forward to the 2022 season and am excited to partner with Coach Englehart and our faculty and staff to help ensure the academic and athletic success of our students.”

Englehart is expected to be on campus at PC next week.