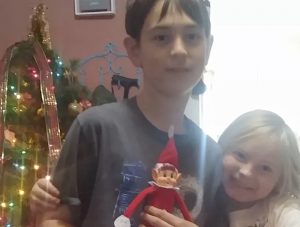 Laurens, South Carolina – A Laurens family lost their home and their belongings in an afternoon fire on Christmas Eve.

Marcus and Fallon English of the Wattsvile community had taken their children, Tryton and Mikayla, to Walmart Friday afternoon for some last minute Christmas shopping. It was there that her husband got calls from neighbors that their house was on fire.

“My neighbor had already called 911, and we got there soon after the firefighters got there,” said English. “We’re still in shock but we feel very blessed that we weren’t there when the fire started.”

English said her husband would not let her leave the car, so she and her children watched while firefighters got into the house, and their dogs escaped. 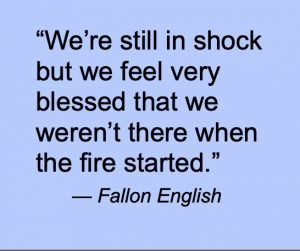 “My husband has a service dog and they were able to catch two of the dogs, but not the last one,” she said. “When we went back Christmas Day to see what we could find, our other dog came running up to me.”

Currently, the family is staying with Fallon’s parents who live nearby.  They had rented that house for two years, and liked the general location near her parents and near the children’s school.

English also needs the help from family because she has an inoperable brain tumor and receives radiation regularly, and her husband is a disabled veteran.

“The community has already helped us so much,” she said. “We have already gotten enough clothes and we’ve been given toiletries and people have donated money.”

Firefighters had been able to pull out some of the Christmas presents from a closet where they’d been stored, and English said they have put those and other smoke-damaged items in a storage unit until they can determine what is usable and what is too badly damaged to keep.

Until then, the family is resting and recuperating 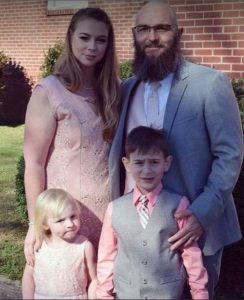 from the shock of seeing their home destroyed. While the outer portion of the home isn’t terrible, the interior, especially the back room, is completely charred.

Capt. Gabe Mull with Laurens County Fire Station 21 said the firefighters were able to primarily contain the blaze to the room of origin and while English said there was speculation that old wiring might have been at fault, Mull said the report said the actual cause of the fire was undetermined. Whatever the cause, the family will have to find another place to live.

“Anytime there’s a fire, there’s a lot of damage, not just the fire, but the smoke and all the water,” Mull said.

The English family knows it won’t be easy to gather needed funds to start over with a deposit, the first and last month’s rent, utility hook-up fees, new school supplies and furnishings.

English set up a GoFundMe under “Christmas Eve House Fire” in hopes that by the time they find a suitable house, they’ll be able to afford the various start-up fees. As of Thursday the family potentially had located a suitable home.

This story first ran on page 1 of the Dec. 29 issue of The Laurens County Advertiser.