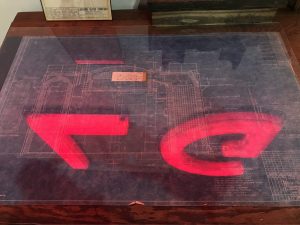 LAURENS GLASS – A reflection of the large LG letters from the former Laurens Glass plant is reflected in the glass-covered blueprint of a 1949 furnace in the factory. Photo by Judith Brown

Laurens, South Carolina – Patrons and supporters of the Laurens County Museum Association will bring in the new year at a New Year’s Eve celebration Friday, and they’ll get a sneak peak at the brand new exhibits at the museum’s new permanent home at the Witherspoon Building, 116 Public Square in Laurens.

But it’s the Grand Opening set for Sunday afternoon, Jan. 2, which holds the most significance for the museum’s board as it includes a wide range of exhibits, including imported stained glass from the former Bethel AME Church, penned detail schematics of a Fresca bottle created at Laurens Glass and photographs of Vietnam taken by a young Laurens soldier.

From 2 to 5 p.m. on Jan.2, the Laurens County Museum officially opens its permanent home in its Witherspoon Building location, which was first donated to the board in 2012.

“The New Year’s Eve event is a fundraiser, but starting Sunday, Jan. 2, the museum will be free for anyone who comes,” said Executive Director Laura Clifford Cook. 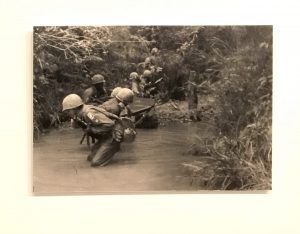 BEING THERE – Never before exhibited photos by Laurens native Johnny Graham from his time in Vietnam are among the museum’s current items.

Cook has worked with board members and with museum staff member Chris Pennington to develop exhibits on the main floor to showcase some of the people and the history of Laurens County.

The Vietnam photos are part of the military history exhibit.

“I think it’s really special,” Cook said. “The photos were Johnny Graham’s. He was from Laurens and he was in Vietnam in the early years, and these photographs have never before been exhibited.”

It’s designed to be a community-driven museum, Cook said. Some exhibits will not be completely finished and there may be some inaccuracies, and she hopes that visitors will let her know when that occurs. There may also be an opportunity for school groups and organizations to work with Cook on needed research.